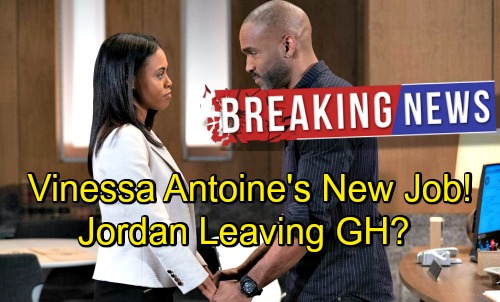 This is an amazing accomplishment for Vinessa but it comes at a cost to her General Hospital role. Filming starts in August 2018 for the series airing in Canada’s peak fall and winter season schedule – right in the middle of what was supposed to be Jordan and Curtis’ wedding planning stage.

Jordan and Curtis’ wedding would have been a GH first – the first black couple to be married on the show. Exactly how will Vinessa’s new show, Diggstown, affect her General hospital role? According to published reports, the wedding may not happen!

Soaps are full of drama, especially soap weddings, and this one promises to be no different. Aunt Stella has already contacted someone named Chaundra, Curtis’ old girlfriend perhaps, and invited her to come to visit. Could Chaundra’s arrival cause Jordan and Curtis to break up or at the very least postpone their wedding?

If Vinessa leaves the show, the wedding would have to be called off unless the role of Jordan is recast. Vinessa is going to require time off to tape the new show, but will she leave for good or just drop to recurring status? Some sources suggest recurring GH status at least for now.

If Vinessa drops to recurring status, the wedding could be put off until taping on Diggstown is finished for the season. This would, in theory at least, give Aunt Stella and Jordan time to work on their differences and come to terms with each other and the marriage.

According to the Toronto Star, Vinessa will no longer be a series regular once taping starts on the new show. However, “not a regular” has not yet been defined as reoccurring or leaving. What happens if Vinessa leaves General Hospital altogether?

If Vinessa leaves General Hospital we can expect a replacement – a recast seems likely to be in the works already. General Hospital has already put out a casting call for a female fitting Jordan’s description. Is this actress the new Jordan or is she in fact Chaundra – we can’t be certain yet.

Vinessa has been with GH since 2014 and worked hard to reestablish a relationship between Jordan and her son T.J. Leaving GH might for prime-time be the best thing for her career but Vinessa will certainly be missed. CDL wishes her luck with her new job and will provide updates on her status as we receive them. Stick with the ABC soap and don’t forget to check CDL often for the latest General Hospital spoilers, updates and news.