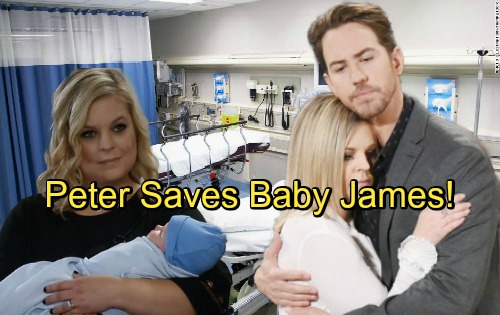 General Hospital (GH) spoilers tease that a major storyline could be revisited soon. A situation that played out with Julian Jerome (William DeVry) and Danny Morgan (T.K. Weaver) could be reimagined with Peter August (Wes Ramsey) and baby James West (Sally Brown)! GH viewers know that soaps tend to repeat history, so reflecting on the past could help predict the future.

Longtime General Hospital fans will recall that little Danny was diagnosed with leukemia in 2013. He was cured by a bone marrow transplant from Grandpa Julian, who was the only viable match. That hot plot included the reveal of then Crimson publisher Derek Wells, which was Julian’s witness protection identity. GH also exposed Julian as Sam Morgan’s (Kelly Monaco) birth father, so they really packed in some drama.

Could the show do a similar story with Peter and James? Both Maxie Jones (Kirsten Storms) and Nina Reeves Cassadine (Michelle Stafford) are softening toward Peter. Saving James could help Peter push past the final barrier and earn this family’s gratitude. Even Liesl Obrecht (Kathleen Gati) might change her tune just a bit. This could be Peter’s true ticket to redemption.

Many childhood illnesses are curable only by bone marrow transplants. James had extensive in-utero testing to rule out Huntington’s disease, but some other shocker may be looming. Several metabolic disorders are also curable by transplant. They don’t always appear until the child is at least a few months old, so there’s plenty of time for James to become ill.

Maxie herself contracted Kawasaki disease as a young child. As a result, she had a heart transplant from her cousin, B.J. Jones (Brighton Hertford), in one of GH’s most tragic episodes. As for James, he may suffer from a potentially fatal disease that requires a bone marrow transplant. If Peter’s the only match, he may step up to save Maxie’s son and gain her forgiveness in the process.