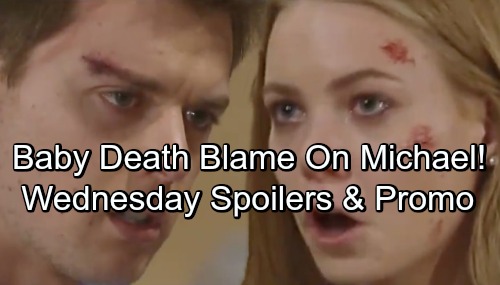 Nelle will naturally keep that tidbit to herself in Wednesday’s episode. As she turns on the waterworks, Nelle will shout that Michael did this. She’ll accuse him of ruining everything and Michael will believe it. You can bet both Michael and Chase (Josh Swickard) will feel guilty over this stunning death. Michael wanted to protect his child, but he’ll feel like he killed him instead.

Meanwhile, Lucas will grill Brad about his whereabouts. Brad suggested that he simply took a drive with Wiley, but Lucas will want to know where they went. That’ll kick off plenty of lying for Brad. The truth will inevitably come out down the road and when it does, it could take on toll on their relationship.

Until then, Chase will spread the news about Nelle’s murder attempt. He’ll give Lulu (Emme Rylan) updates as Ava (Maura West) eavesdrops nearby. They’ll both be taken aback when they hear that Nelle tried to kill Michael. Ava will just hope her connection to Nelle stays buried. GH fans can’t forget that she’s got that incriminating blanket, so more trouble could be brewing.

For now, Ava will try to focus on Kiki’s (Hayley Erin) case. She’ll refuse to believe that Dr. Bensch (James DePaiva) can pull off a win in court. Instead, Ava will think the dirty doc’s going to get what he has coming. She’ll do her best to be strong and confident for Kiki’s sake.

Other General Hospital spoilers say Josslyn (Eden McCoy) will finally get to see her mom. Sonny (Maurice Benard) will set up a quick visit since Carly’s (Laura Wright) planning to flee. Jason warned that they could be in Canada for a few months, but this mess will probably be resolved much sooner. Nelle may even cut a deal by confessing that she lied about the staircase shove.

Regardless, Carly will think it’s time to share. She’ll tell Josslyn that there are some things she needs to know about Nelle. When Joss realizes everything out of Nelle’s mouth has been a lie, she’ll be livid. Josslyn will explode over Nelle’s plot to kill her brother, so she may take her chance to confront Nelle soon enough.

Over with Jason (Steve Burton), he’ll call Sam (Kelly Monaco) and ask for a favor. She’ll be taking a trip to Ferncliff with Curtis (Donnell Turner) later this week. Sam may try to gather some evidence for Diane (Carolyn Hennesy), but Mary Pat (Patricia Bethune) and Dr. Lasaris (Casey Biggs) won’t make it easy.

Back at GH, Liz (Rebecca Herbst) will break Sonny’s heart. It looks like she’ll tell him that his grandson didn’t make it, but the baby switch twist will bring more drama eventually. We’ll keep you posted as other General Hospital details emerge. Stick with the ABC soap and don’t forget to check CDL often for the latest General Hospital spoilers, updates and news.