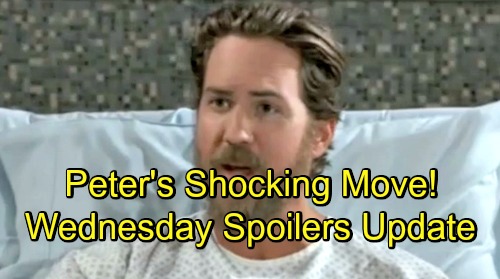 General Hospital (GH) spoilers update for Wednesday, August 8, tease that it’ll be court day for Dr. Bensch (James DePaiva) and Kiki (Hayley Erin). Ava (Maura West) will give her daughter some final words of encouragement as the trial draws near. She’ll tell Kiki that Dr. Bensch is going down, but a shocker could derail that plan.

Scott (Kin Shriner) will see the potential for major damage, so he’ll warn Franco (Roger Howarth) of trouble. General Hospital spoilers say Franco will get updates on Griffin (Matt Cohen) and Kiki’s hookup, but he won’t have much time to process it. Scott will insist that Franco needs to spill this news to Alexis (Nancy Lee Grahn) immediately.

Meanwhile, Alexis will head into the courtroom and make any last-minute preparations. She’ll be surprised when Julian (William deVry) walks over for a quick chat. He’ll be glad Kiki has someone as skilled and caring as Alexis on her side.

Julian will have total confidence in his ex, but things are about to spiral out of control. Despite Franco’s hard work, Alexis probably won’t get the sex message soon enough. Even if she does, she won’t be able to get a firm grip on it before the trial begins. It sounds like Alexis will be thrown off her game.

Other General Hospital spoilers say Valentin (James Patrick Stuart) will rub Nina (Michelle Stafford) the wrong way. She’ll be miffed by his continued attempts to reunite, but Valentin will likely stand firm. He loves Nina with all his heart, so how can he ever truly give up on her?

Across town, Kim (Tamara Braun) will help Drew (Billy Miller) with a problem he’s facing. He’ll state that he’s in over his head, so Kim will pitch in if she can. What will Drew be dealing with? Margaux’s (Elizabeth Hendrickson) been waiting around every corner lately, so she might be on his mind again. There’s some attraction between them, so Drew may consider making his move.

Kim once dated Drew, so she might be able to offer some guidance. However, this topic would undoubtedly be uncomfortable. Kim’s still got the hots for Drew after all these years, so let’s hope he doesn’t play with her heart too much.

Of course, Drew could open up about something far less hurtful. Regardless, their friendship should grow stronger. These two have been bonding as parents and pals, so at least there’s a nice connection between them. Drew will also overhear somebody’s conversation on Wednesday, which could leave him with another dilemma. Poor Drew’s got a lot on his plate!

Elsewhere, Finn (Michael Easton) will lay down the law. He’ll make it clear that he’s not helping Anna’s (Finola Hughes) captors until he sees her in the flesh. Finn will just want to make sure Anna’s still alive and kicking. General Hospital spoilers hint that Finn will get his wish soon, but he’ll remain concerned about the danger. He’ll just hope Robert (Tristan Rogers) can handle his part of the plot.

At GH, Peter (Wes Ramsey) will rant about his expediated supermax sentence. He may have to do something drastic to stop it. Peter has some stunning information about Patients 1-5 in Russia. He should really give Robert a tidbit to prove he knows his stuff.

General Hospital viewers will want to check out Wednesday’s gripping scenes. We’ll keep you posted as other GH details emerge. Stick with the ABC soap and don’t forget to check CDL often for the latest General Hospital spoilers, updates and news.