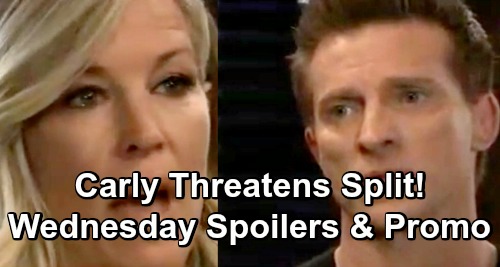 General Hospital (GH) spoilers for Wednesday, December 19, tease that Nina (Michelle Stafford) will get an offer from Valentin (James Patrick Stuart). At least she’ll think it might be an offer! Nina will smile as she asks if this is an invitation or a demand. Of course, Valentin will insist it’s an invite only. He’d never want to push Nina too hard, but he’ll definitely like the idea of some holiday fun.

While Valentin inches his way back into Nina’s heart, Alexis (Nancy Lee Grahn) will show up to defend Cameron (William Lipton). He got busted over the pot deal, so Alexis will walk him through what happens next. Cam will look nervous as he sits in the PCPD interrogation room. He’ll worry that he’s going to land in jail, but he should wiggle out of his jam for the most part.

Other General Hospital spoilers say Kristina (Lexi Ainsworth) will unload her problems. It looks like she’ll tell Sam (Kelly Monaco) how she misread the situation with Valerie (Brytni Sarpy) and planted that kiss. Daisy (Kelsey Wang) was there to console Kristina afterward and draw her deeper into the apparent cult, but Kristina will still battle regrets. She’ll feel like she just destroyed a close friendship.

Kristina will suggest that the worst part is coming home to Sam, but she won’t mean that how it sounds. Perhaps Kristina will think it’s time to spread her wings, which could lead to her moving in with Daisy and her pals. Over with Sonny (Maurice Benard), he’ll once again find himself in a tricky position. Mike’s (Max Gail) made another mess and now Sonny has to clean it up.

Thankfully, Margaux (Elizabeth Hendrickson) found Mike and presumably Yvonne (Janet Hubert). She’ll reunite Sonny with his dad, so Sonny will think no real harm’s been done. He’ll contend that there’s no danger and hope he can make Mike’s legal woes go away. Marcus (Nigel Marcus) will keep fighting for charges, but there’s no way they’ll stick with Mike in this mental state.

Margaux may settle Marcus down and earn Sonny’s gratitude once again. They’ll most like share some tender moments in Wednesday’s new GH episode, December 19. Later, Carly (Laura Wright) will express concern and outrage. She’ll tell Jason (Steve Burton) that if Sonny does this again, she won’t take him back. It seems Carly will be talking about Sonny betraying her, so he’d better be on his best behavior!