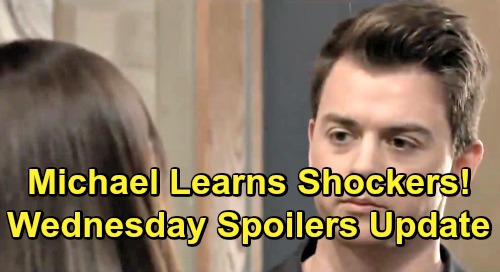 General Hospital (GH) spoilers for Wednesday, December 26, tease that Willow (Katelyn MacMullen) will let her walls down with Michael (Chad Duell). She doesn’t seem all that comfortable opening up to Chase (Josh Swickard), but maybe that’s because he’s so happy-go-lucky. Chase is becoming a bright spot in Willow’s life and that’s great, but only Michael can’t understand her pain.

Willow will talk about her surprise pregnancy and how difficult it was to cope with. It looks like she’ll admit she gave her baby up for adoption. General Hospital spoilers say Michael’s connection to “Wiley” will come out eventually. Willow will be taken aback to learn Michael is the baby’s godfather, so this situation will become even more complex.

At Pentonville, Nelle (Chloe Lanier) will be flustered over a shocking visitor. When Liesl Obrecht (Kathleen Gati) arrives, Nelle will wonder what she’s doing there. She’ll assume there’s going to be trouble and she’ll be right. Liesl will point out that Michael believes his baby was stillborn. Since Liesl delivered a kid that was alive and kicking, she’ll demand to know what kind of scam Nelle’s running.

General Hospital spoilers say Nelle will admit she swapped her baby with Brad’s (Parry Shen) newly adopted one. She’ll push Liesl to stay tight-lipped, but Dr. O won’t reveal her plans. Of course, it makes sense for Liesl to sit on this secret and save it for when she really needs it! She’ll just be glad she’s got all the facts.

Over with Josslyn (Eden McCoy), she’ll remind Oscar (Garren Stitt) to stay positive about what the future holds. Joss will feel like a lot can change in a year. She’ll hope that by next Christmas, Oscar’s healthy and looking forward to many more years of life.

Next, GH fans will see Ryan (Jon Lindstrom) torture Kevin (Jon Lindstrom). He’ll gloat to his brother about all the mayhem he’s causing in Port Charles and how he’s fooling everyone. However, Ryan’s plot may not be as solid as he thinks. Laura (Genie Francis) is worried about “Kevin” and the crazy behavior he’s exhibiting. She’ll chat with Carly (Laura Wright) about it and they’ll agree “Kevin” is acting nuts.

Carly will argue that “Kevin” isn’t in his right mind if he’d dump Laura to be with Ava (Maura West). She’ll feel like they’re missing something here and we all know what that is. “Kevin” isn’t really Kevin, but it’ll be a while before Port Charles figures that out.

Lulu (Emme Rylan) will at least realize Mary Pat’s (Patricia Bethune) murder may be connected to Kiki’s (Hayley Erin). She’ll mention that during a conversation with Laura and alarm an eavesdropping Carly. They’ll all discuss the serial killer that’s on the loose and worry about more victims popping up.

Finally, Ava’s mourning will bring another meltdown. Anna (Finola Hughes) will get caught in the crossfire as Ava faces off with someone. It just might be Griffin (Matt Cohen). Ava has accepted that Griffin didn’t stab Kiki to death, but that doesn’t mean she thinks he’s blameless in her daughter’s demise. Ava will push Anna to let her sparring partner stay, so she may have more blasting to do.