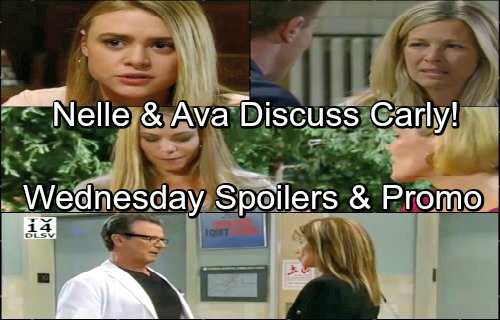 General Hospital (GH) spoilers for Wednesday, June 20, tease that Michael (Chad Duell) will try to get to the bottom of Nelle’s (Chloe Lanier) claims. She spilled the story of how she met Chase and ultimately got involved with him. However, Nelle left out some crucial facts – like the part where she reported Chase for inappropriate behavior.

Now Nelle insists that Chase is stalking her, so Michael will try to get some answers. He’ll wonder if what Nelle’s saying is true, but Chase will undoubtedly deny it. Even if Nelle had something to do with Chase landing in Port Charles, it’s only because he’s out for revenge. At least that’s how he feels at the moment!

Nelle really knows how to reel these suckers in, so there’s no guarantee Chase’s plans won’t change. In the meantime, Michael may realize Chase could be a useful ally. They both wanted to see the best in Nelle and got burned. Joining forces makes perfect sense, so it sounds like Nelle had better watch out for her vengeful exes.

Later, Dante (Dominic Zamprogna) will get the scoop on Chase and Nelle’s link. He won’t be pleased to learn his partner’s been keeping secrets. General Hospital spoilers say Dante will rip into Chase and cause quite a scene at the PCPD.

Elsewhere, Oscar (Garren Stitt) will have a tense chat with Julian (William deVry). It’s clear that Oscar cares about his mom and doesn’t want to see her get hurt. Nevertheless, that’s not the real reason for Oscar’s complaints. He mainly wants to see Kim (Tamara Braun) with Drew (Billy Miller) instead.

Oscar may not admit that to Julian, but he’ll certainly indicate that he disproves of Kim’s current romance. Of course, Julian won’t be scared off. He’ll suggest that he’s not going anywhere, but Oscar won’t give up hope for his parents’ reunion.

At GH, Dr. Bensch (James DePaiva) will corner Alexis (Nancy Lee Grahn). He’ll confess that he’s in a bit of a legal jam and could really use some help. Dr. Bensch may wonder if Alexis would be willing to represent him, but she obviously can’t. She’s already representing Kiki (Hayley Erin), so the creep’s out of luck!

Speaking of Kiki, she’ll have a tough discussion with Griffin (Matt Cohen) on Wednesday. Kiki will feel like maybe filing this lawsuit was a giant mistake. She’ll worry that she’s no match for Dr. Bensch, who’s got plenty of influence at the hospital.

Griffin will likely remind Kiki of what she’s fighting for and suggest that Dr. Bensch can’t get away with his actions. Sadly, moving forward with this plan could spell big trouble. Griffin and Kiki’s hookup will probably be exposed thanks to this storyline, so stay tuned.

Other General Hospital spoilers say Ava (Maura West) will meet up with Nelle. They’ll talk about Carly’s (Laura Wright) stint at Ferncliff, which even Ava wouldn’t wish on her worst enemy. She’ll tell Nelle that it’s truly horrible in there, but it’s doubtful that’ll bring any guilt. Nelle always does what she has to do to protect herself.

Meanwhile, Jason will avoid disaster with a little assistance from Kevin (Jon Lindstrom). It’s only fair since Kevin nearly blew Jason’s cover. He called Jason by name, but he’ll likely suggest he was mistaken on Wednesday’s new GH episode. Despite his reservations, Kevin won’t want to rat Jason out.

A crisis will be averted, but for how long? We’ll give you updates as other GH news comes in. Stick with the ABC soap and don’t forget to check CDL often for the latest General Hospital spoilers, updates and news.