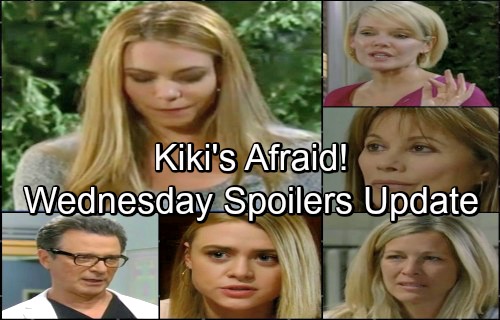 General Hospital (GH) spoilers update for Wednesday, June 20, tease that Oscar (Garren Stitt) will have an awkward discussion with Julian (William deVry). He may think he can discourage Julian and Kim’s (Tamara Braun) romance, but that plan won’t work. Julian will suggest that he truly cares about Oscar’s mom. He’ll smile and make it clear that he’s not backing off.

Over with Alexis (Nancy Lee Grahn), she’ll land in a tight spot at GH. Dr. Bensch (James DePaiva) will bring up his legal troubles and ask Alexis to represent him. She’ll likely admit she already agreed to be Kiki’s (Hayley Erin) lawyer. That tidbit’s going to come out anyway, so Alexis might as well spill it now.

Meanwhile, Griffin (Matt Cohen) will do his best to comfort Kiki and keep her focused. She’ll fear that this lawsuit is an epic mistake, but Griffin may help her remember why she’s fighting. It’s not just about Kiki anymore. She has to think of all the future victims she might be helping.

Of course, Griffin and Kiki’s night of passion will eventually come back to haunt them. Dr. Bensch will probably have a hand in that exposure, but that’s drama for another day. Until then, Ava (Maura West) will catch up with a torn Nelle (Chloe Lanier). GH fans know Nelle has a lot on her mind. She’s worried about Chase’s (Josh Swickard) threat, but she’s still glad Carly’s (Laura Wright) under control.

Ava will note that Ferncliff’s pretty rough – even for someone she hates as much as Carly. She may feel like this is awfully extreme, but Nelle will think it’s all working to their advantage. The longer Carly’s in Ferncliff, the less risk there is to Ava’s custody agreement. As for Nelle, it eliminates one more obstacle to her future with Michael (Chad Duell).

However, Nelle’s chance with Michael is long gone. She just doesn’t know it yet! Michael’s manipulating Nelle, but an interesting twist caught him off guard. He just confronted Chase about the stalker accusations, so he’ll get his answer on Wednesday’s new GH episode, June 20.

Whether Chase followed Nelle to PC or not, he doesn’t seem like an obsessed creep. There might be a bit of pining going on, but he mostly wants payback. Michael may sense that Chase is innocent and propose teaming up. Two vengeful exes are better than one, so this could become a crucial partnership.

General Hospital spoilers say Chase will also explain his actions to Dante (Dominic Zamprogna). He really should’ve disclosed his link to Nelle sooner. Dante will lash out at the PCPD newbie, so any trust they’ve established will be broken.

At Ferncliff, Jason (Steve Burton) will catch a lucky break. Kevin (Jon Lindstrom) will cover for Carly’s hero and keep her lifeline intact. He’ll warn the duo to be careful and hope that Mary Pat (Patricia Bethune) remains in the dark.

It sounds like some shocking moments are in store. We’ll give you updates as other General Hospital news comes in. Stick with ABC’s GH and don’t forget to check CDL often for the latest General Hospital spoilers, updates and news.