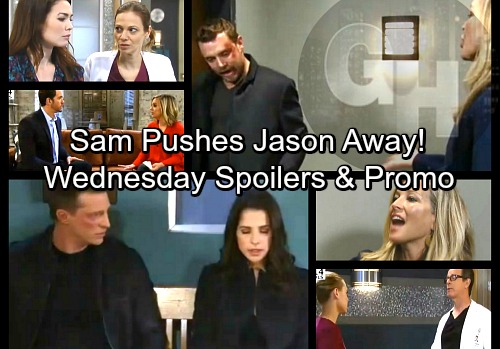 General Hospital (GH) spoilers for Wednesday, March 28, tease that Kim (Tamara Braun) will push her new friend to open up. She’ll try to find out what’s going on between Liz (Rebecca Herbst) and Franco (Roger Howarth). Liz may admit that Franco’s been keeping secrets again and it’s tough for her to get past that. She misses Franco terribly, but it’s hard to trust him at this point.

Kim may remind Liz that love can overcome a lot of obstacles. If Liz and Franco are truly meant to be, then they can get through this together. In the meantime, Franco will struggle to pry answers out of Betsy (Deborah Strang). She’s feeling guilty and was recently sedated, so she may not be willing to offer a coherent explanation just yet.

Later, Franco will attempt to find out where he stands with Liz. He’ll hope for another chance, so he’ll urge Liz to tell him what’s next. Across town, Maxie (Kirsten Storms) will see right through Peter’s (Wes Ramsey) manipulation – at least his latest round of it! She’ll suggest that she knows what Peter’s trying to do and it’s not going to work.

Maybe Peter will want to distract Maxie from her painful surroundings. Since Maxie will be back at home, Peter might keep delaying his exit in hopes of providing comfort. Whatever the case, Peter will assure Maxie that he only wants to help her. He’ll battle guilt over Nathan’s (Ryan Paevey) death as he consoles the poor widow.

Other General Hospital spoilers say Dr. Bensch (James DePaiva) will tell Kiki (Haley Erin) to swing by his office. He’ll insist that she won’t regret it. Something tells us Dr. Bensch is wrong about that! Kiki will seem highly uncomfortable about meeting with the doc alone. He gave her an awkward shoulder massage during their last conversation.

GH released spoilers that pointed to a kiss last week, but they jumped a gun a bit. It looks like that smooch is actually happening this week. Dr. Bensch will plant one on Kiki soon enough, so she’ll have draw the line here. No internship or expert advice is worth getting sexually harassed over.

Elsewhere, Carly (Laura Wright) will lash out at Drew (Billy Miller) for fighting with Jason (Steve Burton). She’ll get that Drew’s in a world of pain, but she won’t think this is the way to make it better. Attacking Jason isn’t going to solve anything.

Over with Jason and Sam (Kelly Monaco), they’ll share a tender moment. General Hospital spoilers say Sam will acknowledge her need for distance. She’ll think it’ll work out best for everyone if she avoids love entirely for a while. Perhaps that’ll help Sam decide who her heart really belongs to.

The mood will be much lighter for Oscar (Garren Stitt) and Josslyn (Eden McCoy) on Wednesday. Oscar’s freezer ordeal was rough, so he’s been recovering at home. He’s pretty much back to normal, but he’ll note that there’s something that could make him feel even better.

Oscar probably means a kiss from Josslyn or some other sappy gesture. It’s all about teen puppy love for these two! We’ll give you updates as other GH news comes in. Stick with the ABC soap and don’t forget to check CDL often for the latest General Hospital spoilers, updates and news.