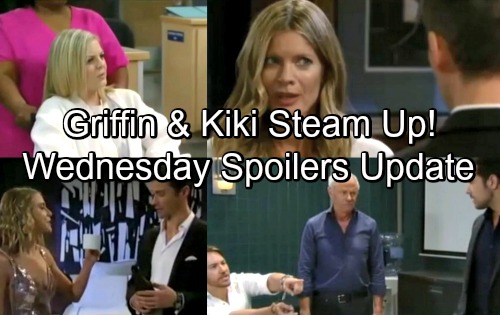 General Hospital (GH) spoilers for Wednesday, May 23, tease that Griffin (Matt Cohen) and Kiki (Hayley Erin) will try to turn their night around. Ava (Maura West) blew her top over Kiki and Griffin’s warm moment, so that brought up deeper issues and sparked a breakup. As for Kiki, she’s feeling unsettled by Dr. Bensch’s (James DePaiva) constant creeping. Kiki just can’t escape this guy!

That’s why Kiki will enjoy relaxing with Griffin for a while. She feels comfortable with him and he’s incredibly easy to talk to. Alcohol should add to the chill vibe once they’re up in Griffin’s room. They’ll move in close, but how far will they go? General Hospital spoilers say they’ll be tempted to indulge in a sex session, but we’ll see how the rest of their evening plays out.

At GH, Maxie (Kirsten Storms) will get quite a shock. It sounds like Peter (Wes Ramsey) may pop in briefly to get checked out. Jason (Steve Burton) had to knock that gun out of Peter’s hands, so a blow to the head was the quickest solution. Peter may need to be examined for signs of a concussion. He might push for medical attention so he can give Maxie (Kirsten Storms) an explanation himself.

It appears Maxie will indeed be curious about the handcuffs. She’ll be hurt when she learns the reason for them. Maxie’s been bonding with Heinrik for months, so she’ll struggle to process this twist. Over with Lulu (Emme Rylan), she’ll still be reeling as well. Peter used Lulu as a pawn in his wicked game and that’ll be hard to accept.

Dante (Dominic Zamprogna) will try to remain supportive, but he’ll eventually snap. He’ll think Lulu should’ve listened instead of confiding in Peter and falling for his trap. Elsewhere, Valentin (James Patrick Stuart) will explain his point of view. He’ll want Nina (Michelle Stafford) to see Peter as someone who’s mistreated and misunderstood.

Of course, Nina will shut down any pity for Peter. She won’t think Heinrik deserves her sympathy at all. He had a tough past, but he’s responsible for his choices in the present. On the pier, Finn (Michael Easton) will help Anna (Finola Hughes) get a grip on her emotions. He’ll feel confident that things are going to work out somehow.

Other General Hospital spoilers say Jason (Steve Burton) will deal with more drama. Peter will push for charges at the police station. He’ll contend that Jason tried to kill him, but the cops may not see it that way. Peter aimed his weapon at Anna, so Jason had a right to whip his gun out, too. He certainly wouldn’t have minded murdering Peter, but protecting Anna was at least part of the equation.

Robert (Tristan Rogers) will be there to put Peter in his place, but we all know Heinrik can be slippery. You can expect Peter to produce some leverage pretty soon. We’ll give you updates as other GH news comes in. Stick with the ABC soap and don’t forget to check CDL often for the latest General Hospital spoilers, updates and news.