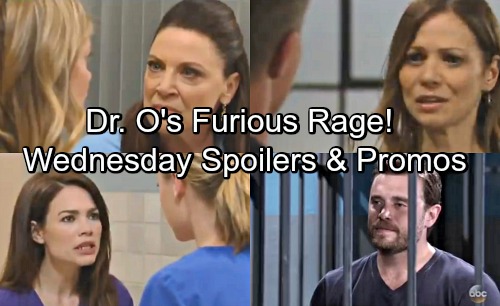 General Hospital (GH) spoilers for Wednesday, May 30, tease that Nina (Michelle Stafford) will deliver some infuriating news. She’ll give Liesl Obrecht (Kathleen Gati) the scoop on Peter’s true identity. Liesl will scowl as she learns Peter is really Heinrik Faison. Since Peter will be attacked with a syringe later this week, perhaps Liesl will be the vengeful assailant.

In the meantime, Peter will offer Drew (Billy Miller) his memories back. He’ll be willing to cough up the copy he found for a price. Peter didn’t get anywhere with Robert (Tristan Rogers), so he might as well try his luck with Drew. He’s obviously desperate to get the charges against him dropped.

Peter will undoubtedly achieve that goal one way or another, but he’ll still have a target on his back. We mentioned Liesl’s potential revenge mission, but there are other sneaky plans brewing, too. As for Drew, it seems he’ll turn down Peter’s offer and try to get his memories back on his own.

Elsewhere, Curtis (Donnell Turner) will assure Sam (Kelly Monaco) that he’s just the partner she’s looking for. He’ll think they should team up on a big case. Since Peter won’t hand over the flash drive without a deal, maybe Sam and Curtis will hope they can find it themselves. They’ll both be anxious to assist Drew in any way they can.

Over with Kim (Tamara Braun), she’ll pay Jason (Steve Burton) a visit. Kim will beg him to hear her out, so she might think Jason can stop Drew’s procedure. She doesn’t want Drew to do anything that could cost him his life. Oscar (Garren Stitt) needs his dad and Kim doesn’t want to see her chance at a reunion slip away. If Jason can prevent this somehow, Kim will push him to act fast.

Other General Hospital spoilers say Liz (Rebecca Herbst) will reel over Kiki’s (Hayley Erin) shocker. Dr. Bensch (James DePaiva) showed Kiki the horrible evaluation he wrote up for her. He suggested he’d be willing to make changes and handed her a hotel room key. Kiki broke down and admitted the latest incident to Liz, but there’ll be much more to spill in Wednesday’s GH episode.

Liz will be stunned as Kiki describes all the sexual harassment she’s endured. She won’t want to put her career in jeopardy, but Liz will think she has to do something about this. General Hospital spoilers say Kiki will eventually decide to turn Dr. Bensch in, but that’ll create a whole new set of problems.

Across town, Lucas (Ryan Carnes) will share his excitement as well as his fears. He’ll tell Julian (William DeVry) he’s thrilled about his impending bundle of joy, but it’s far from a done deal. Lucas will worry about the anonymous birth mom changing her mind. He’ll remain uneasy about what the future holds, so Julian will do his best to see that things work out.

At Alexis’ (Nancy Lee Grahn) place, she’ll be surprised when Valentin (James Patrick Stuart) arrives. He’ll need her help, so expect some tense scenes. We’ll give you updates as other GH details emerge. Stick with the ABC soap and don’t forget to check CDL often for the latest General Hospital spoilers, updates and news.