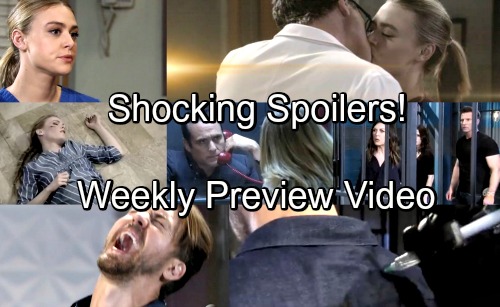 General Hospital (GH) spoilers tease that Peter (Wes Ramsey) will get some visitors in lockup. For starters, Jason (Steve Burton) and Sam (Kelly Monaco) will arrive for a chat. GH fans know Peter kept Jason alive, but he also cost him five years of his life. Now that the guns are put away and Peter’s facing charges, Jason may want to unload a bit of his anger. Peter certainly deserves Jason’s wrath!

As for Sam, she’ll remain focused on getting Drew’s (Billy Miller) memories back. With Jason’s help, Sam should grill Peter about what he knows. They’ll work to pry some answers out of him, so things will inevitably get heated. Anna (Finola Hughes) will eventually show up and wonder what’s going on. She’ll step in and do her best to defend Peter, but he probably won’t want her pity or assistance.

It’s going to take some time for Anna and Peter to form a relationship, but she’ll definitely hope they can bond at some point. Until then, Peter will also have a conversation with Drew. He’ll admit he has a copy of Drew’s memories, so some tough choices will have to be made. Peter will be willing to deliver what Drew needs for a price, but he may face some resistance on this deal.

Drew could really use the flash drive, but he won’t be thrilled about helping Peter in any way. Since Peter wants to secure his freedom, Drew will have to decide how much assistance he’s willing to give. Regardless, Peter will end up walking around as a free man soon. He’ll be caught off guard by an unexpected attacker and we’re betting it’ll be Liesl Obrecht (Kathleen Gati).

General Hospital spoilers say someone will stab Peter with a syringe. He’ll cry out in pain and quickly drop the floor. That sounds like a plan that’d be right up Liesl’s alley, especially since we know she’ll be playing the blame game this week. Liesl undoubtedly holds Peter responsible for Nathan’s (Ryan Paevey) death.

Finally, Carly (Laura Wright) will talk to Sonny (Maurice Benard) about her fate. She’s going on trial for a crime she didn’t commit, so she’ll worry this won’t turn out like she wants. General Hospital spoilers say Sonny will offer reassurance, but he’ll be just as concerned about the outcome.

It looks like Carly will land in a mental institution at the end of all this, so at least that’s better than prison. We’ll give you updates as other GH news comes in. Stay tuned to the ABC soap and don’t forget to check CDL often for the latest General Hospital spoilers, updates and news.