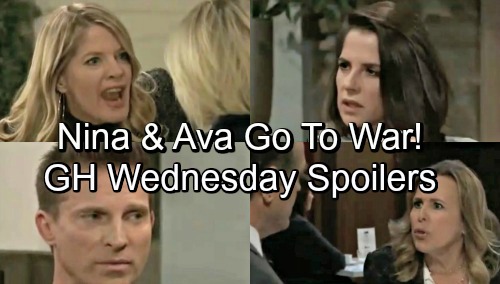 General Hospital (GH) spoilers for Wednesday, November 21, tease that Cameron (William Lipton) will gear up for a major confession. He’s got genuine feelings for Josslyn (Eden McCoy), so he’d like to take this fake relationship into a very real territory. Cam will try to make that happen, which means coming clean about how he feels and hoping Joss feels the same.

However, it looks like Cameron will admit something else before long. He’ll end up revealing much more than he planned, so the truth about Oscar’s (Garren Stitt) tumor may come out. Speaking of Oscar, he’ll get an invitation from Alexis (Nancy Lee Grahn). She’ll hate the thought of the sick teen spending what might be his last Thanksgiving alone.

Whether Oscar accepts the dinner offer or not, he should appreciate the kind gesture. Alexis has been his rock lately, so Oscar’s glad to have her support. Over with Spencer (Nicholas Bechtel) and Valentin (James Patrick Stuart), an argument will break out. Valentin will say something that Spencer takes as a threat, so that’ll cause even more issues for these two.

When Sasha (Sofia Mattsson) appears, she’ll wonder if she’s interrupting something. Sasha should be able to send Spencer and Valentin to their corners for now. Of course, she isn’t Valentin’s favorite person either. Sasha’s presence will undoubtedly leave her partner in crime just as irritated.

Other General Hospital spoilers state that Nina (Michelle Stafford) will fly into a rage. She’ll get updates on Sasha’s drugging, which Griffin (Matt Cohen) managed to figure out and trace back to Ava (Maura West). As a result, Nina will confront Ava on Wednesday. She’ll gripe about Ava giving her daughter a roofie and warn that nothing like that’s ever going to happen again.

If Ava dares to go cross the line with Sasha once more, Nina could go off in a big way. However, she’s stepping up for someone who’s not really her biological child. That revelation’s still to come, so some clues should trickle down to Nina eventually.

Meanwhile, Jason (Steve Burton) and Sam (Kelly Monaco) will share some tender moments. They’ll joke around and grow even closer, so “JaSam” fans will want to tune in. GH spoilers say Sam and Jason will even be forced to spend the night together soon. Circumstances beyond their control will keep them at Sam’s penthouse, but they won’t mind. Deep down, they’ll love every second of it.

Across town, Sonny (Maurice Benard) will push Kristina (Lexi Ainsworth) to humor him on this holiday. He’ll probably coax her into some family time on Thanksgiving, so that’ll be something to look forward to. Kristina needs to be hanging out with the fam and not dangerous cult-recruiting Daisy (Kelsey Wang)!

Finally, Laura’s (Genie Francis) rage will erupt. She’ll demand the truth from “Kevin” aka Ryan (Jon Lindstrom), but he’ll reply that the truth hurts. Since Laura isn’t accepting his whole “drifted apart” excuse, Ryan may decide to get blunt and confess his attraction for Ava. He might hope to cause more pain and get Laura to stand down.