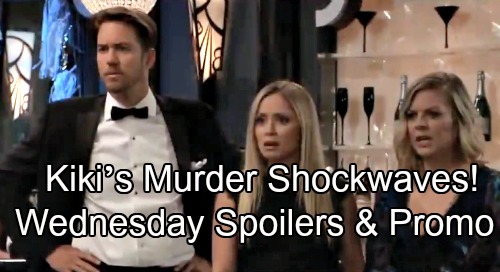 General Hospital (GH) spoilers for Wednesday, November 28, tease that Jordan (Briana Nicole Henry) and Curtis (Donnell Turner) will ponder their latest discovery. Someone’s in the bed of their honeymoon suite, so they’ll want to do some investigating. Once they get closer, they should see that the occupant is dead.

Of course, Kiki (Hayley Erin) is missing after a confrontation with Ryan (Jon Lindstrom). Griffin found blood at the scene, so it’s probably safe to assume this is Kiki and she’s a goner. Ryan decapitated his last victim, but it seems awfully brutal to do the same with this one. Mary Pat (Patricia Bethune) was a nobody, but Kiki is a character that many GH fans love or at least like.

Regardless, this horrifying death will send shockwaves. When Valerie (Brytni Sarpy) gets updates on the killing upstairs, she’ll corner Griffin (Matt Cohen) and insist that the commissioner needs his expertise. Griffin may have to declare Kiki dead, which should be a tough task.

Maxie (Kirsten Storms) and Lulu (Emme Rylan) will get some news that leaves them gasping later. They’ll be in disbelief over what they learn, so word may travel fast. Over with Nina (Michelle Stafford), she’ll be surprised when Charlotte (Scarlett Fernandez) appears. It looks like Charlotte may be a bit early for their ballet outing, but Nina will roll with it.

During their time together, Nina just might see the bully in Charlotte come out. While Nina tries to impart some wisdom, Franco (Roger Howarth) will go for another tactic. He’d desperate to get to the bottom of this bullying issue, so he’ll talk to Jake (Hudson West) about how Aiden’s (Jason David) doing in school. Jake’s usually an open book with Franco, so he should offer any info he knows.

Other General Hospital spoilers say Liz (Rebecca Herbst) and Laura (Genie Francis) will lean on each other. They’ll share their problems and exchange advice, but it won’t be easy to put what they learn into practice. Laura and Liz will just have to do their best as their storylines bring more drama.

At Ava’s (Maura West) penthouse, Ryan (Jon Lindstrom) will arrive – presumably after finishing off Kiki and disposing of her. General Hospital spoilers say Ryan will ask about dessert. He’ll be welcomed in by an excited Ava, who’s loving all this attention. She’s already starting to fall hard. Little does Ava know Ryan most likely just killed her daughter!

This is sure to be a can’t-miss episode, so GH viewers will want to tune in for all the heartbreaking bombshells. We’ll keep you posted as other details emerge. Stick with the ABC soap and don’t forget to check CDL often for the latest General Hospital spoilers, updates and news.