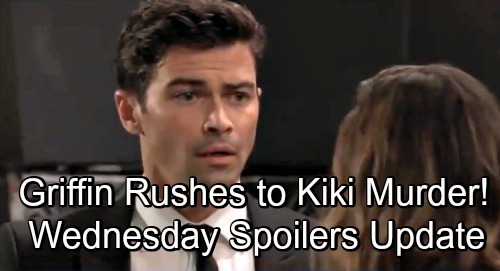 General Hospital (GH) spoilers for Wednesday, November 28, tease that Charlotte (Scarlett Fernandez) will catch Nina (Michelle Stafford) by surprise. She’ll be eager to dash off to the ballet, but Nina may not be quite ready. After all, Nina’s been busy with her best person duties!

Fortunately, Nina will get it together and make sure Charlotte has a fabulous night. Will Charlotte’s defiant streak emerge during this evening together? Charlotte’s a bit of a bully, so it’d helpful if Nina could see her in action. Maybe she’d start to see Charlotte as the problem instead of poor Willow (Katelyn MacMullen), who’s just struggling to do her job.

Elsewhere, Franco (Roger Howarth) will step up for the victim here. Aiden (Jason David) has been slow to speak for himself, so Franco will try to help him out. He’ll decide to chat with Jake (Hudson West) and see if he can get some information that way. Jake knows his little brother pretty well, so maybe he’s witnessed something that could prove useful.

Across town, Laura (Genie Francis) will get some beneficial guidance. She recently gave Liz (Rebecca Herbst) some, so it’ll be Liz’s turn to return the favor. Laura may mention her latest issues with “Kevin” aka Ryan (Jon Lindstrom). He’s moving on with Ava (Maura West) and Laura just can’t understand that.

After Liz gives her perspective, Laura will definitely appreciate it. Nevertheless, putting the advice to good use won’t be easy. Of course, Liz may get another round of advice as well. She’s still having a hard time tackling Aiden’s school drama, so she could use all the tips she could get.

Other General Hospital spoilers say Jordan (Briana Nicole Henry) and Curtis (Donnell Turner) will deal with a crisis. Their just honeymoon started off on a grim note. A dead body’s in their hotel bed and it looks like it belongs to a freshly murdered Kiki (Hayley Erin).

Over with Valerie (Brytni Sarpy), she’ll give Griffin (Matt Cohen) some urgent updates. His skills will be needed for the chaos up in Curtis and Jordan’s suite, so he’ll rush off to pitch in. Griffin should be deeply dismayed when he sees the bloody horror. He may have to confirm that Kiki’s dead and gone, so stay tuned for some gripping GH moments.

Maxie (Kirsten Storms) and Lulu (Emme Rylan) will get a shock soon enough, too. They’ll cry out over a bombshell that hits them hard. Whether they learn Kiki’s the corpse or not, the fact that another murder took place will leave them rattled. That goes for the rest of Port Charles as well.

Kiki’s name will have to be released to the public eventually, so that should leave everybody on edge. No one is safe with Ryan lurking in PC! Speaking of Ryan, he’ll be full of swagger when he pops in Ava’s place for dessert. Ryan will undoubtedly include some deadly clues in their next conversation, but they should go right over Ava’s head. She’ll just think she’s having fun with the new man in her life.

General Hospital spoilers say Ava and Ryan’s connection will grow stronger, which will obviously lead to bad news. Ava’s bonding with Kiki’s killer, so things are about to get interesting. We’ll keep you posted as other GH details emerge. Stick with the ABC soap and don’t forget to check CDL often for the latest General Hospital spoilers, updates and news.