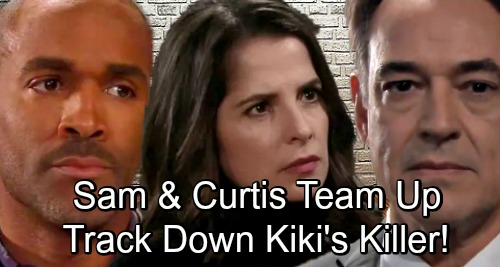 General Hospital (GH) spoilers tease that Curtis (Donnell Turner) and Jordan’s (Briana Nicole Henry) wedded bliss will have to wait. They were all set to begin a wonderful honeymoon together, but their first night as husband and wife has already gone horrible wrong. A female body appeared in the newlywed suite, so Curtis and Jordan will look closer and discover that there’s been another murder.

GH viewers had been bracing for Kiki’s (Hayley Erin) death and it seems the deed is done. Kiki’s closest loved ones will mourn the loss, but Jordan will throw herself into catching the killer. She’ll be truly affected by this life that was cut so tragically short.

Jordan will want to get justice for Kiki and the people who cared deeply for her. She’ll allow herself to be completely consumed by this case in the coming weeks. While Jordan focuses on the Kiki angle, Chase (Josh Swickward) will look for a connection to Mary Pat’s (Patricia Bethune) demise. The cops will hope to find a pattern before the murderer strikes again, but they may not have a ton of luck.

Ryan tends to leave behind a trail of confusion. He thinks it’s a brilliant way to cover his tracks. Nevertheless, Chase has some pretty good skills when it comes to investigating. He’ll manage to locate a clue or two, but that won’t matter much if “Kevin” remains heavily involved in the case. Ryan will be tipped off every time there’s a new break, so he can make adjustments.

However, there could be a new threat that Ryan never anticipated. General Hospital undoubtedly let Curtis be part of the body discovery for a reason. He was already curious about Mary Pat’s killing, so Kiki’s murder will only make him more determined to pitch in.

GH fans know Curtis and Sam (Kelly Monaco) help Jordan out sometimes. Since Jordan will be so obsessed with solving this mess, she may be desperate for anything this dynamic duo can offer. On December 7, Sam and Curtis will join forces for a special assignment. That could involve following a lead or doing anything else that could put them one step closer to Kiki’s killer.

Curtis and Sam’s findings may not be immediately available to Ryan, so that could bring some trouble. Will he start to lose his grip on all this? Will desperation drive Ryan to kill again? We’ll give you updates as other General Hospital news comes in. Stay tuned to the ABC soap and don’t forget to check CDL often for the latest General Hospital spoilers, updates and news.