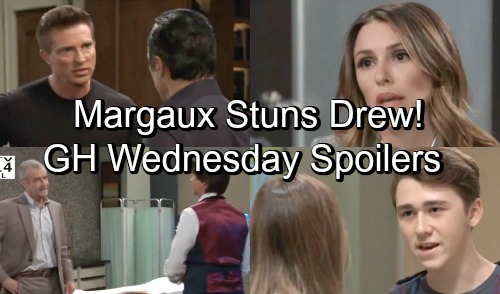 General Hospital (GH) spoilers for Wednesday, October 10, tease that Gregory (James Read) will get sick of Finn’s (Michael Easton) attitude. He’s tried to be patient with his son, but Finn just refuses to meet Gregory halfway. During a confrontation at GH, Gregory will finally snap. He’ll wonder when Finn’s going to stop hating his stepmother, so let’s hope they’ll inch closer to hashing things out.

Meanwhile, Josslyn (Eden McCoy) won’t be willing to give up. Oscar’s (Garren Stitt) been downright nasty to his ex-girlfriend, but she’s not letting it scare her off. Joss feels like Oscar’s hiding something huge, so she wants to get to the bottom of it. On Wednesday, Josslyn will share her plans with Cameron (William Lipton). She’ll insist that no matter what Oscar’s going through, she’s going to be by his side.

Cameron’s in the loop on Oscar’s cancer diagnosis, but he’s been sworn to secrecy. He’ll do his best to stay quiet despite Josslyn’s persistent questions. Of course, Cam’s feelings for Joss could be a factor here. He may urge her to stop fighting for Oscar and hope he can lock Josslyn down for himself.

Across town, Oscar and Kim (Tamara Braun) will face off. He overheard his mom discussing his treatment with Drew (Billy Miller), which convinced him to seek legal advice. Oscar wants to override his parents’ decision to force him into the clinical trial.

Kim will once again try to get Oscar on board, but he’ll resist every step of the way. She’ll insist that he’s not dying, but he’ll think she should face the facts. It should be tough for Oscar and Kim to get on the same page in the coming weeks.

Other General Hospital spoilers say Margaux (Elizabeth Hendrickson) will deliver a proposition. Over breakfast, the DA will make her pitch to Drew (Billy Miller). Margaux’s desperate to make Sonny (Maurice Benard) pay for his crimes, but Drew already declined to help. It looks like Margaux will sweeten the pot this time and push Drew to make a deal.

Margaux’s got the flash drive, so she has to the power to give Drew his memories back. Will Margaux go ahead and pull the trigger on this? If so, how will Drew react to her leverage? He should be angry that Margaux kept the truth from him, but he may consider granting her request. Margaux will at least want Drew to mull it over and get back to her.

Over with Jason (Steve Burton), he’ll have a stern warning for Sonny (Maurice Benard). General Hospital spoilers say they’ll discuss Margaux and the trouble she’s stirring up. Jason will argue that Margaux should be treated like a serious threat. It’s important for Sonny to stay on guard and protect himself.

GH fans won’t want to miss all the action on Wednesday. We’ll give you updates as other news comes in. Stay tuned to the ABC soap and don’t forget to check CDL often for the latest General Hospital spoilers, updates and news.