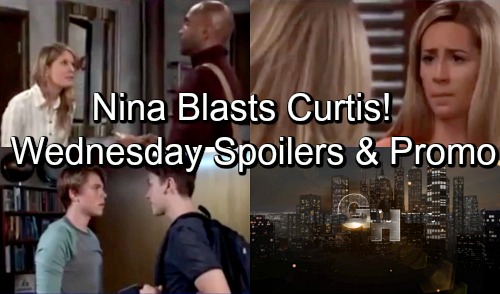 General Hospital (GH) spoilers for Wednesday, October 3, tease that Curtis (Donnell Turner) will pay Nina (Michelle Stafford) a visit at Crimson. She’ll be appreciative of all his help in the daughter hunt, but she’ll be a bit miffed as well. Nina will demand to know why Curtis didn’t fill her in sooner.

Valentin (James Patrick Stuart) always keeps secrets, so Nina can understand his deception. Curtis, on the other hand, is an honest and trustworthy friend. Nina will feel like he should’ve come to her and explained everything, but Curtis will defend his actions. He didn’t want to get Nina’s hopes up before he had something concrete.

Meanwhile, Felicia (Kristina Wagner) will open up to Maxie (Kristen Storms). They’ll have a conversation about Nina, but it won’t take them long to shift gears. Felicia will admit there’s someone else she’s worried about. Since “Kevin’s” been exhibiting some odd behavior, could it be him? He’s certainly an option thanks to Ryan’s (Jon Lindstrom) charade.

Felicia could also be concerned about Lulu (Emme Rylan) and the Ryan Chamberlain anniversary edition. That has to be bringing up a lot of painful memories for Felicia. Over with Ryan, he’ll get a gift from Laura (Genie Francis). It looks like she’ll hand over a framed photo of them, so Ryan will plan to find a very special place for it.

Across town, Monica (Leslie Charleson) will refuse to give up. After Drew (Billy Miller) opens up about Oscar’s (Garren Stitt) grim diagnosis, Monica will give him a pep talk. She’ll urge Drew to believe that Oscar can beat this. Monica will point out that she’s a cancer survivor and promise to make sure Oscar is, too.

Other General Hospital spoilers say Carly (Laura Wright) will be there for Josslyn (Eden McCoy). Oscar just broke up with Joss out of the blue, so she’ll be a real mess on Wednesday. Carly will want to comfort Josslyn if she can. She’ll suggest that whatever’s going on with Oscar has nothing to do with Josslyn. Carly won’t want Joss to blame herself for Oscar’s sudden decision.

Of course, GH fans know Oscar’s just struggling with his diagnosis. Breaking things off was easier than telling Josslyn the truth. Oscar will have to come clean to Joss sooner or later, but he’ll confess to Cameron (William Lipton) for now. During a heated confrontation, Oscar will admit that Cam was right about the cancer.

Cameron will want to console Oscar in his own weird way, but Oscar probably won’t want his pity. He may snap that he broke up with Josslyn, so Cameron should just go ahead and make his move. General Hospital spoilers say Cam will push him to be honest with Joss, but that’s something Oscar won’t be willing to do just yet.

It sounds like another exciting episode’s coming up. We’ll give you updates as other GH news emerges. Stay tuned to the ABC soap and don’t forget to check CDL often for the latest General Hospital spoilers, updates and news.