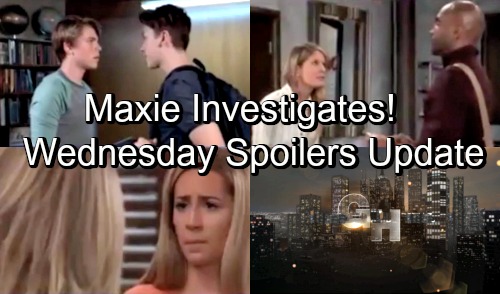 General Hospital (GH) spoilers update for Wednesday, October 3, tease that Oscar’s (Garren Stitt) downward spiral will continue. He’s clearly struggling with his diagnosis, so he could use someone to confide in. It’s not going to be Josslyn (Eden McCoy) since Oscar just dumped her!

Oscar won’t exactly lean on Cameron (William Lipton) either, but he’ll at least come clean about his cancer. He’ll point out that Cam’s suspicions were correct. Oscar’s got an inoperable brain tumor, so he’s already given up hope. Now that Oscar has split from Josslyn, he might snap that Cameron’s got his big chance.

At home, Josslyn will still be reeling over Oscar’s shocker. She just won’t get why Oscar would break her heart like this. Carly (Laura Wright) won’t understand the situation either, but she’ll offer reassurance. She won’t think Joss should hold herself responsible.

Carly will insist that Oscar’s the one with the problem here. Josslyn didn’t do anything wrong, but she’ll somehow feel like she did. Elsewhere, Monica (Leslie Charleson) will focus on helping Oscar beat his cancer. She’s a cancer survivor herself, so she’ll make a firm promise to Drew (Billy Miller). General Hospital spoilers say Monica will plan to throw herself into this project and save Oscar’s life.

Over with Nina (Michelle Stafford), she’ll have some fierce questions for Curtis (Donnell Turner). Despite her appreciation for Curtis’ hard work, Nina won’t be happy that he hid the daughter hunt from her. She’ll feel like he should’ve been a real pal and told her the truth.

Curtis will admit that he had reservations about keeping the secret, but Valentin (James Patrick Stuart) argued that they should wait. Deep down, Curtis didn’t want to get Nina’s hopes either. He’ll just be glad everything worked out. Of course, GH could have a few tricks up their sleeve. Sasha (Sofia Mattsson) is Nina’s daughter for now, but we’ll see if that sticks permanently.

In the meantime, Felicia (Kristina Wagner) will battle some concerns. When she mentions that she’s worried about someone, Maxie (Kirsten Storms) will push her to share who it is. Felicia might have some Kevin (Jon Lindstrom) concerns, which would really about Ryan (Jon Lindstrom). Then again, she may be dealing with fears about Lulu (Emme Rylan) and the Ryan Chamberlain anniversary edition.

Regardless, Ryan’s scheme will continue across town. He’ll grin when Laura (Genie Francis) offers a picture frame, which presumably contains a photo of them together. Ryan will vow to find the perfect spot for it, so it looks like he’ll be getting the hang of this husband stuff.