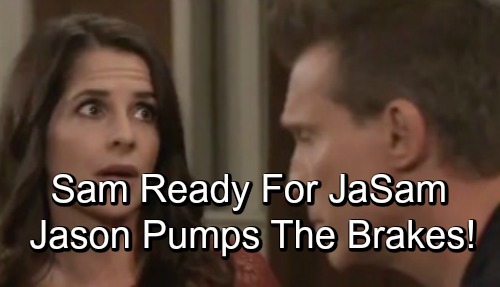 General Hospital (GH) spoilers tease that Oscar’s (Garren Stitt) situation will continue to weigh on Sam (Kelly Monaco). This whole ordeal’s making her realize just how precious time is. Sam already had a pretty good idea thanks to Jason’s (Steve Burton) five years in captivity. He missed out on so many special moments with Sam and his kids.

Now that she knows Oscar’s dying, Sam’s definitely reevaluating a few things. She’s starting to see that life is short, so you have to make the most of it. Many GH fans are wondering why Sam hasn’t been doing that so far. She divorced Drew (Billy Miller), so she doesn’t have to worry about breaking any vows.

Sam doesn’t seem to be pining for Drew either, so that’s not an issue. She obviously still cares about him, but we haven’t seen any romantic sparks since their split. With Jason, on the other hand, there’s always serious sexual tension. When Jason and Sam look in each other’s eyes, it seems like their hearts are ready to explode.

What’s standing in “JaSam’s” way? There’s no reason they can’t or shouldn’t be together. It’s clear that they’re in love, so they really need to go for it. Could Sam see that soon? It’s possible thanks to Oscar’s deadly crisis. Sam may determine that she needs to find happiness while she can. You never know when it’ll all come crumbling down, so it’s important to go after what you want.

On October 8, General Hospital spoilers say Sam will make a daring move. Will that involve her relationship with Jason? Will she plant a kiss on him or announce that she wants to reunite? Those are interesting options to consider. However, GH probably won’t make this too easy. It may be Jason’s turn to pull back soon enough.

General Hospital spoilers say Jason will pump the brakes on October 9. He’ll want to go slow, so that could tie in with the previous info about Sam. Will Jason worry about Sam’s motives? Could he feel like Sam’s only pushing for this because of the Oscar drama?

Let’s hope Jason and Sam can get on the same page in the coming weeks. It’d be nice to see these two get together for November sweeps! We’ll give you updates as other GH news comes in. Stay tuned to the ABC soap and don’t forget to check CDL often for the latest General Hospital spoilers, updates and news.