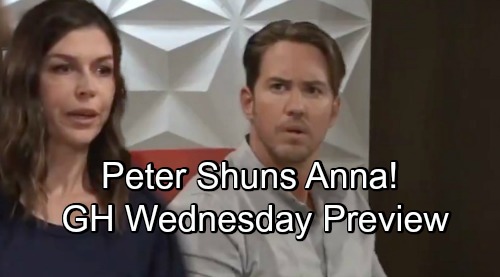 General Hospital spoilers for Wednesday, September 5, tease that Drew (Billy Miller) will get to the hospital to find out what’s going on with Oscar (Garren Stitt). Thanks to Jason (Steve Burton), Drew knows that Oscar was rushed to the hospital after a collapse, but he’ll naturally want to see Oscar and find out exactly what’s causing his problems.

Drew probably won’t be happy to find out that Kim (Tamara Braun) didn’t call him immediately, but now that he’s there, he’ll just want some answers. He’ll demand that Kim tell him what’s wrong with their son, and Kim will have to lay the bad news on him…that Oscar has a terrible illness and is dying.

Meanwhile, Oscar will feel badly that Josslyn (Eden McCoy) is waiting on him in the park for their one-year anniversary date. He’ll call her and tell her not to freak out, but he’s in the hospital. She’ll come immediately to GH with Cameron (William Lipton), who will be questioned by Liz (Rebecca Herbst) about why he was in the park with Josslyn in the first place. Cameron was supposed to be grounded, so he may be in some trouble.

Next, on GH’s new episode on Wednesday, September 5, Alexis (Nancy Lee Grahn) will chat with Sonny (Maurice Benard), Sam (Kelly Monaco), and Kristina (Lexi Ainsworth). It looks like the discussion will revolve around what Kristina’s going to do now that she’s staying in Port Charles. Alexis will say that she knows the perfect job for Kristina, as she looks in Sonny’s direction. Just what will this perfect job be?

It looks like Finn (Michael Easton) and Anna (Finola Hughes) will be back in Port Charles after their time in captivity and revival of Cassandra (Jessica Tuck). Upon their return, Finn will reach out to Chase (Josh Swickard) and say “Maybe you want to stick around. See if we can’t make peace.” It looks like Chase will be receptive and the brothers will spend a little time together.

Meanwhile, Anna’s first order of business will be to see Peter (Wes Ramsey). She’ll show up at Peter’s office and take him by complete surprise. Of course, as far as Peter knows, Anna has been avoiding him, so her sudden appearance should be a shocker for him. GH spoilers say that Peter won’t be at all receptive to his mother, so this interaction probably won’t go well.

It certainly sounds like the drama is heating up on GH. Stay tuned to the ABC soap and don’t forget to check CDL often for the latest General Hospital spoilers, updates, and news.