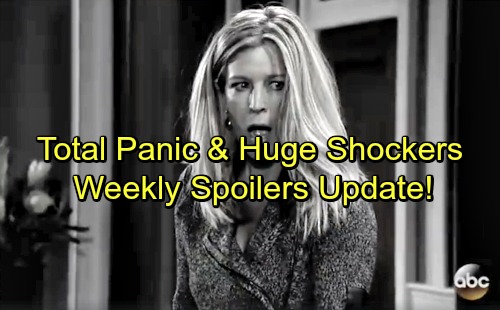 General Hospital (GH) spoilers for the week of January 15-19 tease that the drama will heat up in Port Charles. For starters, Carly (Laura Wright) and Kim’s (Tamara Braun) conflict will erupt. They’ll spar over that box of condoms and who’s to blame. Later, Josslyn (Eden McCoy) will receive some valuable advice. She’ll undoubtedly be told to chill out and stop rushing into adulthood.

Meanwhile, Drew (Billy Miller) will face an awkward dilemma. It sounds like he might have a sex talk with Oscar (Garren Stitt). That could lead to some uncomfortable moments, but it’ll also continue this bonding streak they’ve got going. Drew and Oscar are growing closer every day, which is great news for both of them.

Other General Hospital spoilers say panic will set in for Maxie (Kirsten Storms). Now that Lulu’s (Emme Rylan) interview with Faison (Anders Hove) has been published, it’s only a matter of time until Faison himself appears. Maxie will hope that Nathan can apprehend his father, but she’ll certainly have her doubts.

Across town, Michael (Chad Duell) will question Nelle’s (Chloe Lanier) decision. Will it be another issue related to her new job or will a different problem arise? Regardless, Nelle will be firm with Michael. She’ll stand by her choice and Michael will try to respect it.

At GH, Ava (Maura West) will prepare for her final procedure. She’s excited about fixing the rest of her face, but she’ll have a lot on her mind while under anesthesia. General Hospital spoilers say Ava will get a very special episode on January 17. She’ll reflect on all the pain she’s caused, so GH fans can expect some flashbacks.

Franco (Roger Howarth) will also get a huge shock this week. Will Jim Harvey (Greg Evigan) rev up the pressure? Jim wants Franco’s art studio, so it seems likely that a blackmail plot is looming. Over with Molly (Haley Pullos), she’ll deal with a tough blow. It appears Molly will be thrown out of her apartment, so she’ll suddenly find herself in a tight spot.

Finally, Jason (Steve Burton) will gain support from a surprising ally. Could it be Kim (Tamara Braun) or will someone else step up to encourage him? We’ll give you updates as other GH news comes in. Stay tuned to the ABC soap and don’t forget to check CDL often for the latest General Hospital spoilers, updates and news.