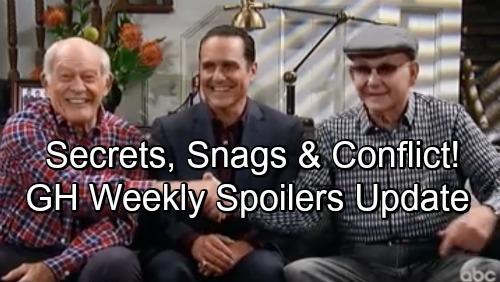 General Hospital (GH) spoilers update for the week of June 18-22 tease that some surprises are in store. First, Nina (Michelle Stafford) will stun Drew (Billy Miller) by bringing up the flash drive. She’ll attract some unwanted interest as he tries to figure out how she knows about it.

Meanwhile, Peter’s (Wes Ramsey) rattlesnake faceoff will reach a startling conclusion. He’ll hope he can get out of this mess unscathed. Over with Liesl (Kathleen Gati), she’ll try to shoo Kim (Tamara Braun) and Julian (William deVry) away from her hostage hideout. It’ll be tough, but Dr. O will have a few tricks up her sleeve.

Later, Alexis (Nancy Lee Grahn) will ask her ex for a favor. She’ll push Julian to attend a therapy session with her, which is what Kevin (Jon Lindstrom) recommended. Julian won’t be thrilled about the idea, but it looks like he’ll eventually get on board. If Julian can somehow offer Alexis peace of mind, he’ll want to make it happen.

Other General Hospital spoilers say Carly will be on her best behavior. She’ll probably try to get back on Mary Pat’s (Patricia Bethune) good side, but she could be fighting an uphill battle. Jason (Steve Burton) will also have a run-in with Kevin. GH fans can expect Kevin to have some doubts about Jason’s sneaky plan. He’ll offer a warning and hope that Jason doesn’t get caught.

Elsewhere, Nelle (Chloe Lanier) will mull over her shady past. She’ll undoubtedly think about Chase (Josh Swickard), who recently caught her off guard. It’ll soon be Chase’s turn for a shocker. There’s a good chance Dante (Dominic Zamrogna) and Michael (Chad Duell) will learn about Chase’s history with Nelle. Chase’s secrets won’t be appreciated, so he’ll definitely face some backlash.

Nelle will also have a chat with Josslyn (Eden McCoy) this week. She’ll be someone Joss can lean on, but this bond is setting the stage for trouble. Nelle’s lies will be exposed down the road, so Josslyn is sure to be furious.

Finally, General Hospital spoilers say Kiki (Haley Erin) will get some disappointing news. Her civil suit will likely hit a snag, but Kiki won’t give up. Too bad Dr. Bensch (James DePaiva) will play dirty! He could blow up Kiki’s world, so keep watching for more drama.