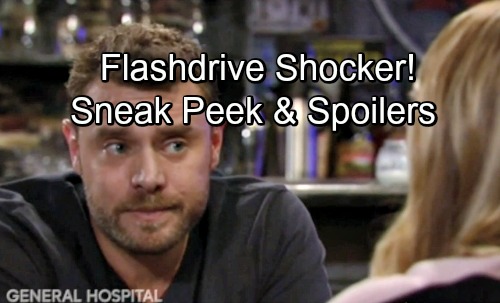 General Hospital (GH) spoilers tease that Nina’s (Michelle Stafford) guilt will hit her hard. She’s clearly been a bit torn about Peter (Wes Ramsey), but it’ll be Drew (Billy Miller) who causes guilt pangs this time. When Nina spots him, she’ll be visibly distraught. Drew’s a caring individual, so he’ll immediately wonder if Nina’s all right. He’ll insist he’s there for her if she needs someone to listen.

Nina will confess that she feels terrible about what happened with Peter. She’ll recap Peter’s deception and suggest she was too quick to let go of her hunch. Nina knew something was off about Peter, but she didn’t trust her instincts. She’ll hate she couldn’t warn Drew about the menace he hired.

Furthermore, Nina will note that Valentin (James Patrick Stuart) knew all along. She’ll explain that her own husband was in the loop on Heinrik, so that’s adding to her guilt right now. Nina will feel like this is all her fault, but Drew will disagree. It wouldn’t be fair to hold Nina accountable for Valentin’s actions.

Drew will also take responsibility for hiring Peter and never suspecting a thing. He just assumed this guy was the great COO he seemed to be. Monday’s GH sneak peek video shows Nina talking about highly successful sociopaths. She’ll contend that Peter’s one and point out how he adapted to any situation.

Nina will mention that Peter was a friend to Maxie (Kirsten Storms) as well as the perfect COO at Aurora. She’ll even bring up the fact that Peter had Drew’s entire memory on a flash drive. That’ll be Nina’s big mistake! General Hospital spoilers state that Drew will grow suspicious. He’ll ask Nina how she knew about that, so she’ll have a mess to clean up.

Nina probably won’t be ready to come clean about Liesl’s (Kathleen Gati) plot and her own part in it. She might fib that Valentin told her about the flash drive or suggest that she heard about it through the grapevine. The whole town is surely buzzing about this story, so it’s reasonable to think there were some leaks. Nina will want to avoid telling the truth, which is that Peter himself offered the info.