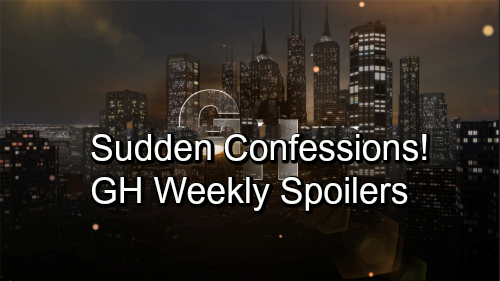 General Hospital (GH) spoilers for the week of September 24-28 tease that some tricky moments are coming up in Port Charles. First, Sonny (Maurice Benard) will share some new developments with Jason (Steve Burton). As the cops close in, Sonny will want his righthand man to be aware of everything. They have to be prepared for whatever Margaux (Elizabeth Hendrickson) throws at them.

Margaux will indeed be working hard this week. She’ll come up with a theory about the corpse that could point her in Sonny’s direction. That’s better than Mike (Max Gail), but it’s still not ideal! Meanwhile, curious Carly (Laura Wright) will poke her nose where it doesn’t belong. She’ll probably seek more “Wiley” related into and potentially leave Brad (Parry Shen) rattled.

Michael (Chad Duell) will offer his mom an apology later. He may be sorry he’s been pushing Carly away or it could be about something else that’s yet to unfold. Regardless, Carly will understand that Michael’s going through a lot. She’ll certainly cut him some slack if he lashes out occasionally.

Other General Hospital spoilers say Cameron (William Lipton) will demand answers from Liz (Rebecca Herbst). Since he suspects Oscar (Garren Stitt) has a brain tumor, he’ll wonder why his frenemy’s been left in the dark. Cam may insist that Oscar deserves the truth, but Liz will call for her son’s silence. She’ll feel like this is Kim (Tamara Braun) and Drew’s (Billy Miller) secret to tell.

Speaking of Kim and Drew, they’ll spend the night together in some fashion. That could mean they’ll support Oscar through a rough patch at GH. Then again, Oscar might learn what’s up and take off. That could bring Drew and Kim together for a night full of worries.

Over with Jordan (Briana Nicole Henry), she’ll sit down with Stella (Vernee Watson) and push for peace. These ladies will enjoy some drinks and try to find common ground. Meanwhile, Julian (William deVry) will deliver a stern warning. The birth mom may have to be contacted about “Wiley’s” medical history, which could obviously spell disaster. Julian might warn Brad about the chaos that could hit.

Elsewhere, Nina (Michelle Stafford) will hang out with Charlotte (Scarlett Fernandez) while Valentin (James Patrick Stuart) gets a sense of satisfaction. He’ll be happy with everything Curtis (Donnell Turner) is accomplishing for him. Across town, Maxie (Kirsten Storms) and Lulu (Emme Rylan) will have a fierce argument. You can bet Lulu’s advice to Peter (Wes Ramsey) will be the topic!

Plus, General Hospital spoilers say Jason (Steve Burton) will make an admission. Will he finally be more open with Sam (Kelly Monaco)? Could Jason confess that he’s craving something other than friendship? Sam knows Jason’s in love with her, but hearing what he really wants could still be a game-changer.

Of course, Jason’s dealing with a ton of Sonny drama right now. That could pump the brakes on the “JaSam” reunion, but their fans can hope for the best! We’ll give you updates as other GH news comes in. Stay tuned to the ABC soap and don’t forget to check CDL often for the latest General Hospital spoilers, updates and news.