General Hospital Spoilers: Why A Sam, Jason, and Drew Love Triangle Is Not Needed – JaSam’s Time Is NOW 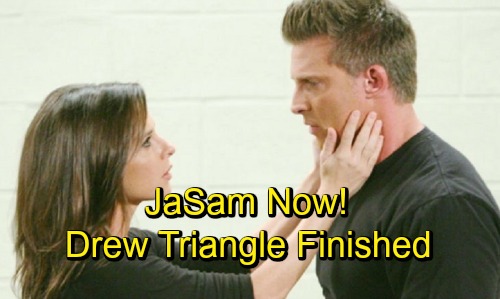 General Hospital (GH) spoilers examine the JaSam situation and determines that GH needs to move ahead with the power couple, and quickly! Fans of General Hospital’s Sam and Jason have waited since 2012 for their couple to reunite. When Steve Burton left the show, Jasam fans were heartbroken. Jason is back, and Jasam should be as well.

Jason often helped Sam with cases as she did him. Why would any Sam fan want her to go back to the way she was the past few years? The whole tv host Sam kick wasn’t a hit. The Media Mogul Sam was a nightmare for most of us.

TPTB at GH have already stated that Margaux (Elizabeth Hendrickson) was brought on for Drew (Billy Miller). General Hospital writers need to get on with their story. Tell us why Margaux is holding the flash drive. Show us the connection between Kim (Tamara Braun), Peter (Wes Ramsey), Drew, and Margaux. Both Kim and Peter know her from somewhere. Kim and Peter are tied to Drew’s past and revealing these connections would make a much better story.

Sam Has Had Plenty Of Time

General Hospital fans know that Sam asked Jason for time. Jason has given her nothing but time. Jasam reunions have always been a slow burn. How slow do we need to go after six years apart? Jason loves Sam as much today as he did in 2012.

Yes, Sam has been through several relationships since. Most of her relationships have not ended well. Sam and Jason have always worked. Sam choice to have kids with Jason. Sam encouraged Jason to stay in the mob when he offered to leave. Sam has remained involved with Sonny (Maurice Benard) and Carly’s (Laura Wright’s) lives.

Sam has never been afraid to be associated with the mob. Why in the world would the mob matter now? Since Jason’s death, Sam has found out that she is more mob-related than Jason and Sonny. Whether Sam associates with Julian (William DeVry) or not, he is a mobster, and his father was a mobster, etc. Neither Jason nor Sonny was born into the mob life.

Her aunt Liv Jerome almost killed Sam. The safer out of the mob speech doesn’t work on General Hospital. After a year of waiting, we do not need a Sam, Jason and Drew triangle to finish off this story. Jason’s return should have been reconnecting with his loved ones from the beginning. Sam and Jason belong together and always have. Why prolong the inevitable, Jasam still finds their way back, why not give it to us already?