General Hospital Spoilers: Nina’s Child Mystery Solved By Necklace – Daughter Found With The Other Half Heart 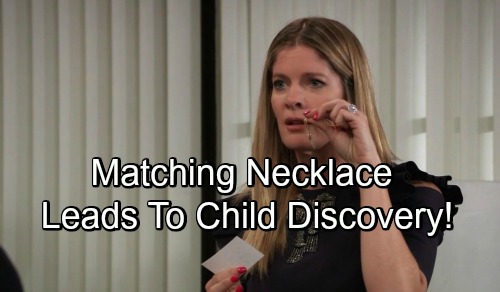 It usually has the Bible verse “The Lord watch between me and thee, when we are absent one from another (Genesis 31:49 King James Version). In modern times, it signifies an unbreakable emotional bond between the two wearers of the necklace. Even though Nina’s baby would have been too young to wear the other half, it is almost certain that the other half went with her.

Right now Nina doesn’t know whether to look for a boy or a girl, although General Hospital fans believe it is a girl, since Valentin Cassadine (James Patrick Stuart) already got that information out of Madeline Reeves (Donna Mills) before her alleged death. Previous General Hospital spoilers tease that Madeline is not really dead, and the closed casket with only a picture could be a clue.

Nina doesn’t know that Valentin is way ahead of her in that respect, along with Curtis Ashford (Donnell Turner) who are searching for her missing daughter, who would be in her mid to late twenties now. The piece of information they don’t have is the existence of the necklace, which will be crucial to finding her; find the other half of the necklace, and they’ll find the daughter.

It is significant that the necklaces bear two halves of a coin or sometimes a heart that fit together like puzzle pieces, since the identity of Nina’s child, who has already been revealed as a girl is currently a puzzle. Stay tuned to GH and keep reading General Hospital spoilers to see the puzzle solved!