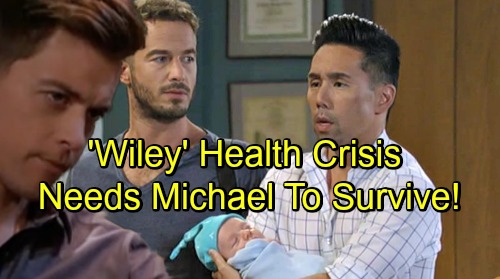 General Hospital (GH) spoilers tease that Brad (Parry Shen) will face more problems. When he decided to swap dead Wiley for a very much alive Jonah, Brad had no idea what he was getting himself into. He certainly felt guilty from the start, but now that guilt’s taking control of his life. It’s only going to get worse as Michael (Chad Duell) misses important milestones and continues to struggle with grief.

Nelle (Chloe Lanier) roped Brad into this mess, but now Brad’s dealing with the consequences on his own. In fact, Nelle’s only managing to make matters worse from behind bars. Brad wasn’t happy about the hint Nelle dropped in her letter to Michael. She suggested that she hopes Michael finds comfort in being around Lucas and Brad’s baby.

That clue should become crucial sooner or later, especially after another GH crisis hits. Brad avoided a birth mom disaster thanks to Julian’s (William DeVry) secret plan. Unfortunately, the next potential disaster may be beyond Brad’s control. He should feel like he’s in over his head in the coming weeks.

On September 19, General Hospital spoilers say Lucas will seek important updates. The next day, he’ll be caught off guard by troubling info. What news would Lucas be trying to find out and why would it upset him? We’ve established that the birth mom drama is officially over. It’s possible Lucas will learn the extent of what Julian did to fix the situation, but what if it’s something far more serious?

When you consider typical soap patterns, a health scare is bound to come up at some point. No baby storyline is complete without one! Perhaps Lucas will take “Wiley” for a checkup and learn the child has developed a medical issue. That could explain Lucas’ search for information as well as his worried reaction.

Of course, it might be something fairly minor at first. Maybe the doctor will just want to keep an eye on the problem for now. However, this could grow into something that will derail Brad’s scheme for good.

If “Wiley” has a condition could tie him to Michael genetically or he needs some type of donation from his father, Brad’s sure to be in panic mode. It makes sense for General Hospital to go in this direction eventually. Will GH fans see the first warning signs next week?

Regardless, Brad’s dream family is turning into a nightmare of a cover-up! We’ll keep you posted as other GH details emerge. Stay tuned to the ABC soap and don’t forget to check CDL often for the latest General Hospital spoilers, updates and news.