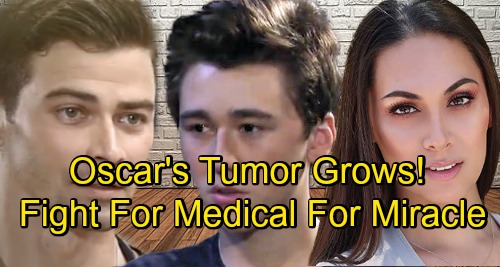 General Hospital (GH) spoilers tease that Oscar (Garren Stitt) has some tough blows in his future. For starters, he’ll find out about that lip lock between Cameron (William Lipton) and Josslyn (Eden McCoy). Of course, Cam’s the one to blame for that. He planted a kiss on Joss out of the blue, so he’ll definitely face some backlash for it.

GH fans can expect Oscar to confront his rival this week. Cameron may not be able to resist gloating about that kiss, but he’ll pay the price for it. General Hospital spoilers say Oscar will lash out and deliver a fierce punch. He’ll do his best to show Cameron that his girlfriend’s off-limits.

Cam certainly seems like the kind of guy who would fight back. He may decide to return the favor and keep this violent showdown going strong. That could spell trouble for Oscar and the medical woes he’s already battling. The last thing Oscar needs is someone hitting him in head and potentially causing more seizures.

Oscar’s dying, so Kim’s (Tamara Braun) naturally protective of him. She won’t be happy if Cam’s rushing Oscar into the grave even sooner. That brings us to Oscar’s next bombshell. Kim may blow this conflict out of proportion and raise suspicions for her son. Oscar may feel like her reaction is over the top, so that could lead to questions.

Oscar will undoubtedly push Drew (Billy Miller) to come clean. He’s not on board with keeping Oscar’s brain tumor a secret, but he’s trying to respect Kim’s wishes. Oscar could easily break down his dad’s walls if he tries hard enough. Drew may decide to confess and let Oscar prepare for the inevitable.

However, a deadly outcome may not be so inevitable after all. General Hospital spoilers state that Dr. Terry Randolph (Cassandra James) will work hard to save the day. She’s a new character who deserves the chance to make her mark on GH, so they may let her heroic efforts prevent disaster.

Griffin (Matt Cohen) could be consulted on this case as well. He’s currently suspended from all duties at General Hospital, but Monica (Leslie Charleson) might approve his return for a good cause. This would be the perfect way to give Griffin a little redemption and prove he’s an excellent doctor.