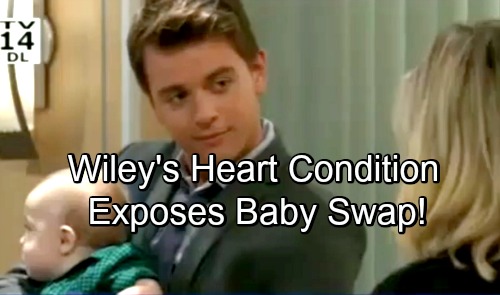 General Hospital (GH) spoilers tease that the baby swap storyline will bring even more drama. Michael’s (Chad Duell) medical history could come into play soon enough. This could be a great way to tie the past to the present and lay the groundwork for the big reveal.

Longtime GH fans know that Michael had a congenital heart condition. He had to have surgery right after his birth, so that certainly brought some scary moments. Now Brad (Parry Shen) and Lucas (Ryan Carnes) are the ones facing serious fears. “Wiley” has a heart condition as well, so this could be a crucial step toward the truth.

Since we know “Wiley” is actually Jonah, has he inherited Michael’s heart issue? This clue isn’t quite enough to bring everything out in the open yet, but it’s certainly one more puzzle piece. Plenty of babies have heart problems, so this may not raise any initial red flags for Michael or even Carly (Laura Wright). After all, they have no reason to believe Jonah’s anywhere other than six feet under.

Nevertheless, all the hints are bound to add up over time. Let’s consider everything that might click into place for Michael sooner or later. For starters, there’s Brad’s nervousness. He turns into a jumpy mess whenever Michael’s around, so that’ll be something for this grieving father to mull over. Michael could eventually suspect there’s more to the story.

Of course, Nelle’s (Chloe Lanier) letter will haunt Michael as well. During a recent chat with Carly, Michael admitted that he knew Nelle was trying to manipulate him. However, he quickly added that Nelle’s advice was spot-on. Michael really does find comfort in being around Brad and Lucas’ little boy.

General Hospital also threw in a line about Michael’s connection with “Wiley.” He suggested that he feels a paternal bond. Michael guessed that maybe the age difference was the reason why. He brushed it off as feeling more like an uncle or something, but he’s actually the “baby daddy.” As Michael grows closer to this kid, that’ll be another part of how this all comes together.

“Wiley’s” heart condition could easily be what pushes Michael into suspicious territory. When he starts to add everything up, doubts about Jonah’s death could emerge. Michael knows Nelle can be awfully sneaky, so he may realize something’s off here. It could lead to the emotional bombshell we’re all waiting for!