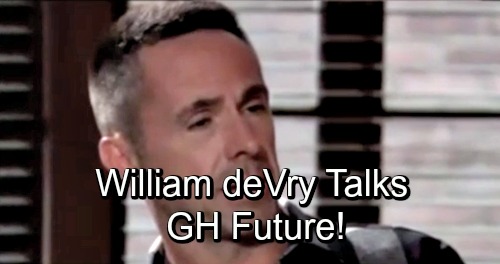 General Hospital (GH) spoilers tease that some big moments are coming up for Julian (William deVry). He’s got plenty of fans who are anxious to see what the future holds. In a recent Twitter chat, William deVry opened up about what’s next for Julian and weighed in on some important subjects. He offered some great clues and fun facts, so let’s look at what he had to say.

For starters, deVry addressed Julian’s love life. Someone wanted to know if he preferred Kim (Tamara Braun) or Alexis (Nancy Lee Grahn) for Julian, but he chose to stay neutral on the subject. “Those r questions left best to writers,” deVry said. He’s tweeted out some Julian and Kim support in the past, but he also knows “Julexis” remains super popular. It’s smart to be diplomatic here.

However, deVry was quick to offer a never-say-never attitude on a reunion between Alexis and Julian. When a fan wondered about that possibility, deVry suggested that “it’s a soap so there’s always hope!!” Regardless of who Julian ends up with down the road, deVry joked that what he wanted most was “more sex” for Julian. He suggested that he’s not shy about those hot shirtless scenes.

Next, deVry talked about a bit of a bummer. He admitted he was disappointed in part of the explosion storyline, which many General Hospital fans would agree with. After Kristina (Lexi Ainsworth) landed in harm’s way, deVry pointed out that maybe Julian should’ve been the one to save her.

GH watchers know Jason (Steve Burton) is a hero and that’s great. However, it would’ve made more sense for Julian to step up here. That would’ve led to some nice scenes for Julian and Alexis as they work to bridge the gap. A viewer argued that Julian should’ve been the rescuer, which deVry backed up. “U and me both. I thought about taking @1SteveBurton out for the day,” he said.

Nevertheless, Burton is actually someone deVry would like to work with more. Felicia (Kristina Wagner), Valentin (James Patrick Stuart), Jason and Lucy (Lynn Herring) are all characters that deVry wants Julian to interact with. It sounds like deVry wants Julian to widen his circle a bit more often.

Finally, deVry was asked if there was anything he’d like to see moving forward. Is he rooting for something that hasn’t been done on GH before? “A good ol fashioned dust up w Sonny where we shake hands at the end,” deVry said. “All bloody but a truce!! @MauriceBenard”