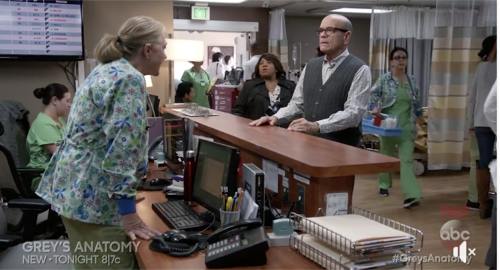 Bailey still hadn’t forgiven Ben for giving up on his residency on tonight’s all-new episode of “Grey’s Anatomy” because she was starting to wonder about his commitment issues.

Ben had given up on several careers since their marriage and had in fact been an anesthesiologist when they first met, however, the stress that she was generally under as well as Ben’s latest career change had started to feel a little too much for Miranda Bailey. She knew that something was wrong when she began feeling off and so she secretly visited another hospital because she suspected she was having a heart attack and hadn’t wanted to worry anyone. Not even Ben who she refused to talk to that morning or her own people at Grey Sloane Memorial who she merely told she wasn’t feeling well.

Bailey hid her condition from everyone and unfortunately, she didn’t trust people that she did go to. The nurses at the other hospital had a problem with talking over the patients and the resident that had checked her had told her that there wasn’t anything wrong. He had hooked her to a monitor and had run an EKG, but he claimed that he saw nothing and that it meant she was ok when she knew better. Bailey didn’t come up with a heart attack. She had felt its symptoms, had recognized what they were and knew that she needed a full cardiological stress test. Bailey had told the resident that and all that got her was a sit-down with an attendee.

The attendee hadn’t been the head of the cardiology department and still, he believed he was in the best position to tell her that she didn’t need a stress test. He tried to tell her that maybe she was confusing it with something else and had behaved even more insultingly when he found out she suffered from a mental illness. She suffered from OCD and Bailey had tried to tell the doctor that her condition wasn’t her life story. It was merely a part of her story and Bailey said that she hadn’t wanted that story to end anytime soon.

Bailey had then asked for the stress test again and, when that hadn’t worked, she asked to see another doctor. She had been hoping to get the cardiologist and all she received was the shrink. The shrink had been called because the other doctors thought Bailey was making her symptoms up and that the whole thing was in her head. Except it wasn’t. Bailey told the shrink to go away because he didn’t understand the statistics for women suffering from heart conditions or that it was worse in women of color. She told him that he couldn’t have remembered things like that because he had never been in her position and so she demanded that stress test again.

That’s something Bailey wouldn’t want and she sure didn’t want anyone to see how vulnerable. Bailey was the Chief of Surgery and she had to be tough to get everyone take her seriously otherwise they would have doubted her every move yet Bailey realized in time that the only person that was going to take her seriously was Maggie. Maggie was at the top of her field and she would actually listen to Bailey. Bailey was a great doctor and if she said she was having a heart attack then the first thing Maggie would have done was a stress test. That was why Bailey was pushing for it so hard and she just wishes someone would have taken her seriously before she passed out.

Bailey had seen the lady in the next bed was suffering and so she had immediately jumped in to help the poor woman, however, doing so had exacerbated the same symptoms doctors were ignoring until she passed out in front of them. That’s when they rechecked her EKG and noticed that she was, in fact, having a heart attack so Bailey finally got treatment. The doctors had rushed her into surgery and the second time they had to do it they had agreed to give Maggie surgical privileges. She had wanted to join in on the surgery because she had doubted the other doctors. She thought they should have taken Bailey at her word and that they had waited too late.

Bailey, on the other hand, had decided to let things go and she had also asked Richard to call her husband. Ben deserved to be there and she realized that she had wanted him there to support her, but Ben had been upset with her because she had lied to him that morning. She had claimed that she had indigestion when he noticed something was off and so going forward Ben said he wanted the truth. He didn’t need to be protected by being lied to and later he also convinced his wife to call her mother who was someone that deserved to be told the truth. So Bailey called her mom to tell her that she had gotten hurt and that she was ok now. And her mom said, “of course you are, you’re my Mandy”.