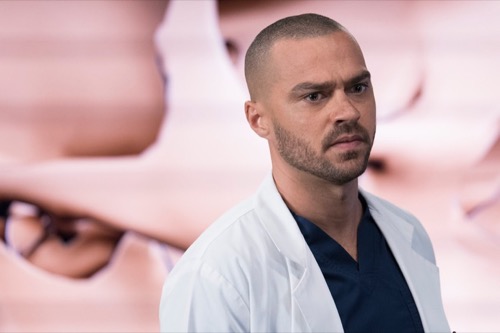 Tonight on ABC their hit drama Grey’s Anatomy returns with all-new Thursday, April 19, 2018, season 14 episode 21 and we have your Grey’s Anatomy recap below. On tonight’s Grey’s Anatomy season 14 episode 21 called “Bad Reputation” as per the ABC synopsis, “The hospital brings in crisis management to help them sort out allegations against Harper Avery. Meanwhile, Nurse Olivia shows up at Grey Sloan with her son, throwing Alex and Jo for a loop; and Arizona decides to spend more time with Sofia, who is having a hard time at school.”

Meredith used to love those awards. She had worked for years to earn one of them and now she couldn’t even be proud of them. Meredith considered those awards to be dirty and so not only did she return her award she also returned her mother’s two awards. Meredith’s mother had betrayed her best friend just to qualify for an award and that gave Meredith more than one reason to hate what the awards stood for. They could have been many other women in her field that deserved an award and they had been prevented from entering all because an Avery sexually harassed them, so everyone was one of one mind on this. They all believed the Harper Avery Award was tainted!

Meredith had gotten caught by reporters entering the hospital because they had wanted her opinion, as a recipient of the award, on the Avery foundation. She hadn’t mentioned anything about the foundation or her feelings on Harper Avery and so she instead confirmed that she was returning her award. Meredith hadn’t liked the connection she couldn’t sever between herself and the hospital that happened to be partially owned by the Avery Foundation but that didn’t mean she couldn’t let her feelings be known and that turned out to be a good thing. The foundation, as well as the hospital, was being hit by the scandal.

Catherine was doing everything she could as the woman running the foundation to keep that everything running smoothly. She brought in an outside lawyer and was trying to figure out what could she do to save the Avery name when she found out Jackson was behind the contest. The contest at the hospital was supposed to be an Innovation Award and the benefactor was allegedly this mysterious third party, so finding it had actually been Jackson had made everything worse. Jackson funded a competition and then entered it. If the media got wind of what it would look like Jackson had funded a competition to feed his own ego.

Catherine had been so disappointed with Jackson and she had agreed with Bailey to end all of it. The competition had been ended and unfortunately, that didn’t mean word hadn’t gotten out. It was soon all over the hospital that Jackson funded the competition and so Catherine worked with a lawyer to rehabilitate their image and they both agreed that Jackson should be seen working with Meredith. Meredith had distanced herself from the scandal and she was a talented surgeon. If she worked with Jackson then that could possibly rub off on him, so Jackson invited Meredith to work on a complicated surgery with him.

The patient had a growth that covered almost half his face and he could kill him if the growth continued to expand. Thus his doctors back in Venezuela who didn’t have the resources to give the patient proper care had looked into other ways to help him and so that’s when they found the charity. There was a charity that helped people that normally couldn’t afford surgeries in foreign countries and so this charity had been set to pay for this young man’s surgery at the hospital when they found out about the scandal. It was a nasty scandal that involved sexual harassment and what was also turning out to be sexual assault. And so the charity pulled their funding.

Their board of directors wasn’t going to pay for surgery at a Harper Avery hospital and so Meredith said that’s ok because they’ll perform the surgery pro bono. She truly wanted to help the patient and knew Jackson wouldn’t have a problem with doing the surgery for free. Meredith knew that Jackson asked her to join his team because he needed good press and she talked that over with him. He needed to know that he was a great surgeon who hadn’t been afraid to take risks and she told him that he needed to be that guy again for their patient. Their patient didn’t need someone playing it safe and Meredith could see that’s what Jackson was doing.

Jackson had wanted to do the surgery in parts because he had been afraid of bad press. He said the whole foundation counted on him and Meredith reminded him that there were real victims. Like the woman that dropped out of her surgical residency because Harper Avery assaulted her and who was now waitressing because she had never been able to recover. Meredith and even Hellmouth said that was a real victim, not the foundation. Jackson said the foundation had seventy-two hospital all over the country and that they didn’t deserve to keep the jobs. Only Jackson still wasn’t getting it.

It was until they were in surgery together that he realized Meredith was right. The victims deserved recognition and they shouldn’t have to face Harper Avery wherever they turned. They needed something more and so after Jackson took a risk in surgery that worked out, he decided to take another risk with his mother. Catherine’s maiden name was Foxe and Jackson believed they should rename the foundation in her honor because she had been the true visionary and didn’t deserve to get thrown under the bus just so the foundation she built would then survive without her. So Catherine chose to accept the wonderful honor that her son bestowed on her because she had been proud to be his mother.

Speaking of motherhood, Amelia had been helping Owen with his foster son Leo and tonight she met Leo’s biological mother Betty. Betty was fifteen and became an addict after being overprescribed for a sports injury. It was while she was injured, that she became pregnant and later homeless. So Amelia had felt bad for Betty because she could see Betty deserved a second chance and so she invited Betty to come live here with just a few conditions. The conditions being Betty had to go to meetings and she had to call her family to tell them she was ok as well as where she was staying.

Amelia decided to take care of Betty because Betty deserved it and she allowed Meredith to deal with DeLuca. DeLuca was sleeping on their couch because he had been depressed since his girlfriend moved away and so Meredith called in his sister to deal with him. He had gotten so focused on fighting his sister that he did leave her couch in the end. But with all the people that have come and gone from that house over the years, no one had changed as much as Alex. Alex ran into a former nurse he slept with and had given syphilis. She remembered how Alex was back then and had told Jo all about it.

Except Jo was deterred and even Olivia admitted that after Alex successfully treated her son, so Alex and Jo talked afterward and Alex decided to tell her that he found out something that made him feel like he hadn’t grown up.