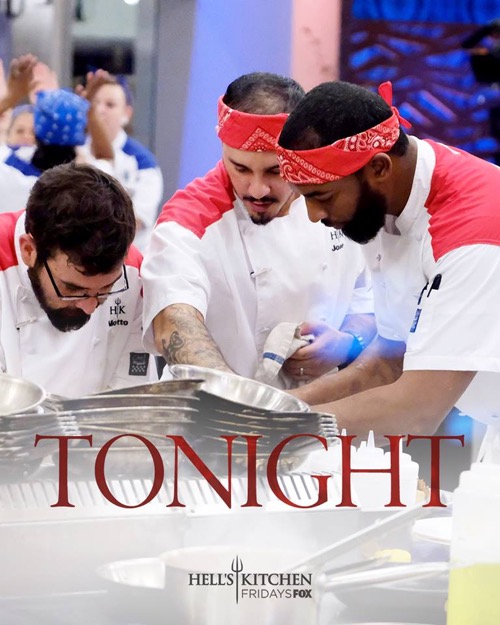 Tonight on FOX their Gordon Ramsay culinary competition series Hell’s Kitchen airs with an all-new Friday, November 16, 2018, season 18 episode 7 and we have your Hell’s Kitchen recap below. On tonight’s Hell’s Kitchen season 18 episode 7 episode called, “Last Chef Standing,” as per the FOX synopsis, “The chefs cook five commonly served “staple” dishes, but the challenge comes with a twist: minutes into the challenge, each team will have to pick one member to leave the kitchen, and continue kicking a team member out until only one is left.”

Hell’s Kitchen begins tonight with the men giving Trev credit for holding down the meat station, but also tell him that he talks a little too much. He doesn’t mind being picked on because it simply means he is playing the game the right way.

The following morning, the chefs hustle outside, where Chef Gordon Ramsay asks them what the key element is to running a kitchen smoothly but nobody says “teamwork!” The stock car sponsored by Rockstar shows up and they watch how quickly the pit crew rolls in and changes the tires.

Chef Ramsay tells them to line up in the dining area where there are 5 amazing dishes in front of them. Spaghetti and meatballs in Marinara sauce. Veal Scallopini Piccata. Crispy Fried Chicken. Shrimp and Grits. Cioppino. For their challenge, each team is given 40 minutes to recreate these 5 dishes but he reminds them they are to be aware of what each team member is doing; the Blue team has an extra chef so one has to sit out and Gizzy offers to sit out of the challenge, which everyone is surprised she would do.

As the teams are busy working on the dishes, only 8 minutes into the challenge, Chef Ramsay tells them to remove someone from their team; Roe and Bret leave from the kitchen, talking their team through the dish from the pass. At 24 minutes, another member had to leave the kitchens – Heather and Jose walk out; neither team like where this is going. 16 minutes another one has to exit the kitchen – Mia and Scotley go to the pass. 8 minutes and the last member has to leave – Trev leaves with the only Motto left in the red kitchen. Kanae leaves with only Ariel in the blue kitchen. Only 90 seconds left and everyone rushes back in to plate the dishes. The blue team plates everything with 20 seconds to go but the red team didn’t work as a team and Bret didn’t put sauce on his plate in the time allotted.

Shrimp and Grits are first, made by Heather and Motto (1). Fried Chicken is Jose (1) Vs. Kanae (1). Veal Scallopini is up next, made by Ariel (1) and Bret. Spaghetti and Meatballs are Scotley (1) vs. Roe (1). It is a time of 3-3 with one dish left of the Cioppino, it is Trev vs. Mia (1) and Trev’s tastes amazing but he forgets the main ingredient, the fish which is still sitting in the pan. The winner is the blue team 4-3. The blue team is going go-cart racing, but when Chef Ramsay asks if they have any tips for them, Scotley suggests they crash.

Once they leave, the men learn it’s delivery day and they have to shuck every ear of corn by hand and remove all the peas from the pod. He also tells Trev to come down as Scotley times him 1.26 seconds from taking the fish from the pan to his plate. Ramsay laughs, but Motto feels pretty beat down and disappointed in Trev. While they are doing their punishment, Trev breaks out and Sous Chef Christina Wilson makes him get looked at medically; Scotley scoffs feeling he is just cutting a break and tells him to stop acting like a baby girl.

Trev gets checked and gets an allergy shot, but outside Scotley continues to make fun of him. He feels this isn’t high school and doesn’t appreciate being called “baby girl”; Scotley knows he is about to explode and keeps pushing him.

The women thoroughly enjoy the go-carts and the adrenaline rush it’s bringing them. She yells at everyone to get out of her way, calling them bitches. Once they return, all the chefs are taking some time to relax before dinner service. Gizzy wants to be on a station alone to show she can do it herself, but Roe wonders about it since she literally offered to back out of the challenge. Roe reminds her to be confident like she is at home and be like that here. Chef Ramsay calls and wants to see them all through the red kitchen and in the dining room, urgently.

He welcomes them in the dining room, which isn’t set for dinner service. It is set up like a Farmer’s Market, explaining that tonight he is “trimming the fat” and not all of them will be competing in the challenge tonight. The chefs who stood their ground and stayed in the kitchen are safe, the first 3 chefs who were willing to leave the kitchen will be cooking for their lives!

The weakest performer will be leaving Hell’s Kitchen. On the Blue team cooking is Gizzy, Roe and Heather and on the Red team is Bret, Jose, and Scotley. He tells them to say goodbye to their fellow teammates as this may be the last time they ever see them. They have 45 minutes to shop in the Farmer’s Market and create on an incredible dish to save their lives.

Back in the dorms, the red team thinks Jose will be okay while the blue team is torn between Gizzy or Heather going home. Trev really wants Scotley to go home, as he is a big mouth and bully.

Roe presents her dish which is swordfish, visually it is beautiful. Bret brings up a seafood pasta that has clams, mussels, shrimp and scallops in it. Chef Ramsay says it looks like it was plucked right from the sea. He asks Bret to head back in line as it tastes really good. He says the one shows skill beyond belief and the person moving on is Bret, based on the complexity of the dish. Bret shouts that was for his mama as he heads to the dorm, hugging Trev.

Heather brings her coconut curry poached lobster tail, she went out of her comfort zone and didn’t want to play safe. The lobster is beautiful but the French beans don’t fit. Heather stands next to Roe and beats Roe’s dish, sent back to the dorm. Gizzy brings up lightly grilled bass, feeling her dish is very rustic compared to everyone’s whose are elegant. She feels this is the best way to show who she is. Chef Ramsay points out that she left the scales on the fish, it is delicious and definitely her on a plate. The person moving on is Roe, who thinks she is the quiet assassin and wants to be Chef Ramsay’s next chef.

Jose presents pan seared Salmon and chorizo hash. He loves how the color pops and the skin is really crispy. Jose stands next in line as Ramsay said he would only add a touch more acidity to the dish; the person moving on is Jose; congratulating him on having the best dish in the competition thus far. Everyone welcomes him with open arms in the dorm.

Back in the dining room, Scotley brings his dish which is Tuna with red lentils. Chef Ramsay cannot understand why he would give him dry red lentils with the best tuna in the world when he had the entire Farmer’s market around him. He had the perfect sear on the tuna as Chef asks him to stand back in line. He disagrees with the lentils, pointing out the irony on how Scotley replaced Gizzy in her job out in Atlanta, Georgia. Chef Ramsay reveals the person moving on is Scotley, he shakes her hand and hugs her and thanks to Chef Ramsay quickly returning to the dorms.

Chef Ramsay tells Gizzy she came in like a firecracker, but she somehow lost her confidence which shows him she isn’t ready to be his executive chef. He wishes her to continue climbing that ladder. Gizzy feels guilty for being the only one who held herself back in the competition.