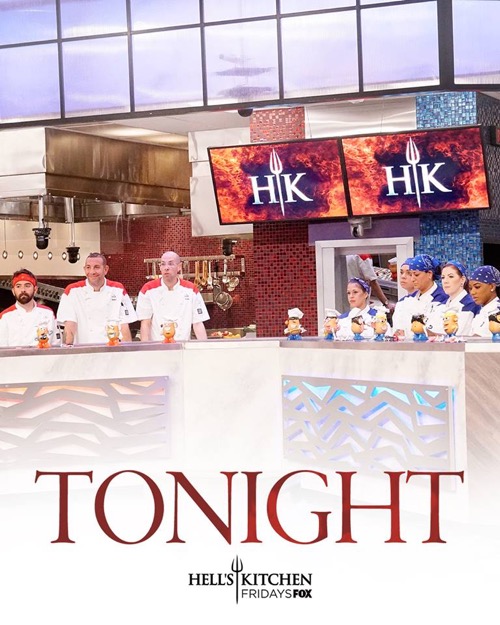 Tonight on FOX their Gordon Ramsay culinary competition series Hell’s Kitchen airs with an all-new Friday, November 9, 2018, season 18 episode 6 and we have your Hell’s Kitchen recap below. On tonight’s Hell’s Kitchen season 18 episode 6 episode called, “Hot Potato,” as per the FOX synopsis, “Chef Ramsay introduces the chefs to a culinary legend known all over the world, Mr. Potato Head. For their challenge, the chefs must create a dish with the potato as the key component. Then, tensions rise and the pressure becomes unbearable for one of the chefs, leading to a chaotic dinner service.”

Hell’s Kitchen begins tonight after Kevin was sent home and Chef Gordon Ramsay send the rest of the chefs back to the dorm. The red team feels they need to pull it together and watch as the big personalities on the blue team begin to clash. T tells Mia and Gizzy they need to stop guessing themselves. Chris feels like he is losing himself in this competition, blaming his doubts on the accident.

In the morning, everyone greets Chef Ramsay who says they are going to meet a legend and household name, but Marino emerges with Chef Potatohead. They are told for decades this toy has encouraged imagination and creativity around the world; today’s challenge is to create a dish with the potato as the key component. Each chef is given a Potato Head with their Chef names on it, Marino tosses a bucket of attachments labeled with ingredient names on it, the ceiling opens up and dumps potatoes and attachments on the floor. They are given 30 seconds to find the components they need to make their dish.

They have 45 minutes to create a dish using the ingredients they gathered, with the potato as the star. When time is up, the Blue team needs to remove one of their dishes, as they have one more chef on their team and chose not to present Kanae’s dish, saying its not visually appealing and a little clunky. To help judge the dishes is Chef Richard Blais, successful restaurateur and cookbook author. Each dish will be judged 1-5 per Judge and the team with the most points wins the challenge.

Jose presents a sweet potato gratin (4) T made sweet potatoes with butternut squash (3). Trev made a potato fritter with shrimp (6) and Heather made a surf and turf potato pancake (6). Chris made a lobster pie (10) and Ariel make a Yukon and Sweet Potato dish (9). Motto made his own take on shepherd’s pie, but Chef Blais finds it almost unedible giving it only a 1, same with Chef Ramsay. Mia makes a perogi potato dish (10). Scotley (8) and Gizzy can’t make a connection only getting (3). Its the final round with Red (30) and Blue (31) – Bret brings up his dish of traditional gnocchi (10) and Roe is the last dish for the blue team making steak and gratin (9); the teams are tied and the Chefs now have to pick who had to ultimate dish of the night; and it belongs to Chris from the Red Team!

They still want to taste Kanae’s dish. Chef Richard Blais tells her and the team that her dish was definitely an 8 out of 10. They thank Chef Blais for being there as Chef Ramsay reveals the red team’s reward is to walk on the wild side at one of the country’s premiere Exotic Animal Experience “Animal Tracks” and then they will be served by Three-time Michelin Star Chef Daniel Humm. The women are told their punishment is washing, peeling and slicing thousands of potatoes.

The men are thrilled to finally get some “Bro time”, enjoying playing with the various animals. The Nomad Food Truck arrives, and they get to enjoy the fresh air and be outdoors, away from the craziness of Hell’s Kitchen. Roe and Heather joke how the Potatoheads are watching them kill their family members. Chris returns with the guys and his emotions are back again, worrying the longer he stays the worse it’s going to get. Chris brings Sous Chef Christina Wilson into the back room and tells her that his head isn’t in the game; she shoves Jose out of the back room as Chris tells her he needs to bow out of Hell’s Kitchen.

Christina understands that his mental health comes first and informs Chef Gordon Ramsay, who speaks to him in private. He reminds him that his health comes first and getting him sorted is the most important and will help him with that right away; Chris thanks him for the opportunity as Chris feels it is better to face the music and the right thing to do. He packs up and leaves.

Chef Ramsay lines up both kitchens, informing them that Chris is dealing with personal issues and has left the competition with all the support he needs. Everyone feels a bit emotional and that they are doing this one for Chris. Marino opens Hell’s Kitchen for Steak Night and guests begin to arrive including actor, Titus Welliver (Bosch), actor Cornelius Smith Jr. (Scandal) –at the Blue Chef’s table and Kelsea Ballerini (Grammy Nominated Singer)- at the Red Chef’s table.

Talented Rookies Mia and Jose are able to get the appetizers out of their kitchens and both teams are onto entrees without issue. Chef Ramsay is getting upset with the fish, as it is coming up raw; the fish is for a 6 top of firefighters and he expects so much better. He orders Kanae to get them back in the oven as Marino apologizes, but is able to serve them a few minutes later.

Chef Ramsay grabs Motto and makes him read the tickets, forcing the team to respond to him. He really wants Motto to start using his voice. T, in the blue kitchen, is honored to be working the meat station on Steak night, but she immediately brings up rare steak and expects much more from her and Heather; the next two steaks they bring up is overcooked. Heather and T begin to fight with each other as T feels she can’t trust Heather with her back. Ariel tells them to stop bickering and just get it done.

Scotley screws up on fish but looks for Trev to take the fall, as they are supposed to be a team. T tells Heather to take the next round of steaks up, but when Heather asks for a please, T tells her to screw off. Chef Ramsay thanks T, but stops communicating with anybody else in the kitchen. Roe doesn’t understand how they can work when T won’t even talk to the person she is sharing responsibility with. T brings the steak to the pass and when Chef cuts it, he crouches down and wipes his eyes.

Its 90 minutes into service, and Chef Ramsay calls Jocky over, telling him to look at it. Once he gets off his knees he calls the entire blue team over, demanding to know what has happened because he knows he has a talented team in here. He tells them all to get out and pick two nominees to leave. Their chef table wonders about their food? The red team pushes forward with their nearly flawless service. He thanks Trev, saying his cooking has been on point all night. He says that was a great job and very fast service!

In the dorms, the women continue to bicker about who should be nominated, clearly, the biggest battle is between Heather and T; no one knows what to do. The blue team returns to the dining room as Chef Ramsay tells them he is utterly embarrassed. Mia gives the first nominee as T because they felt she couldn’t communicate with her partner on her station. Their second nominee is Heather because she couldn’t communicate with her teammate which brought the whole team down.

Chef Ramsay finds this bizarre the runner-ups from S16 and S14. Heather compares what T did to what her son does when he doesn’t get what he wants at the toy store. She completely shut down and wouldn’t speak to her at all. T says she made an executive decision for Heather not to touch the meat at all and Heather was to support her. They begin to bicker again and Chef Ramsay says the person leaving Hell’s Kitchen is T. He tells her to take off her jacket and Heather back in line. He says that T is a bloody good chef, but right now he has 11 chefs behind her that are performing better. He orders the ladies to get rid of the personal crap and start focusing on the job at hand.

“As a former runner-up, I expected T to come full of swagger and skill. Sadly, she came back with double the swagger and only a fraction of the skill!”
~Chef Gordon Ramsay