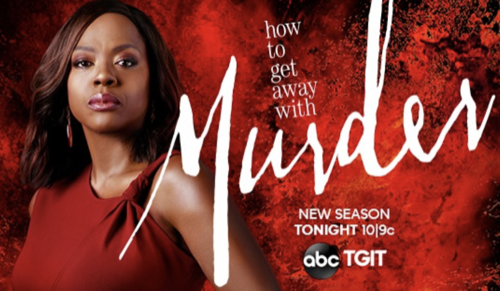 Tonight on ABC their hit drama How To Get Away With Murder (HTGAWM)  airs with an all-new Thursday, September 27, 2018, episode and we have you How To Get Away With Murder recap below!  On tonight’s HTGAWM season 5 episode 1 premiere “Your Funeral,” as per the ABC synopsis,  “In the Season 5 premiere, Annalise selects students for her new legal clinic at Middleton and juggles job offers from competing firms, all while the Keating 4 attempt to move on from last semester’s turmoil.And, in a flash-forward, a new mystery is introduced and it shakes things up for everyone.”

How to Get Away with Murder (HTGAWM) begins tonight with Annalise Keating (Viola Davis) noticing Frank Delfino’s (Charlie Weber) somber face at Oliver Hampton (Conrad Ricamora) and Conner Walsh (Jack Falahee). She tells him he looks like someone just died, when he tells her what is going on, she slaps him. Outside, someone is groaning and blood is dropping on the snow, and falling outside the white tent.

Three months earlier, Gabriel Maddox (Rome Flynn) enters Annalise’s class, where it is literally packed with students. She tells them they are choosing a brutal, mean and ruthless life by being there and everyone wants in. She smiles at their enthusiasm. She gives them 30 seconds to convince her they care about something other than themselves. She splits the students, cutting half of them out, telling the other half they need to up their game for tomorrow.

Outside, Frank is holding baby Christopher whom Annalise is thrilled to see until Conner, Asher Millstone (Matt McGorry), Laurel Castillo (Karla Souza) and Michala Pratt (Aja Naomi King) come and dote on the baby too. Annalise reminds them they cannot do this as she won’t play favorites. It’s clear that Michaela still has extremely harsh feelings towards her. Gabriel chases after Annalise, who feels its a compliment that she remembers him. She tells him to keep the sucking up for class. Frank witnesses he conversation, and it piques his interest.

Annalise is met by Tegan Price (Amirah Vann) at Caplan & Gold, who doesn’t want her working there; they are interrupted when Emmett Crawford (Timothy Hutton) greets her asking Tegan to show them to the conference room. Annalise plays hardball with several law firms and now that she has the class action lawsuit behind her. Annalise tells Caplan & Gold they are desperate and won’t take the job after their biggest clients went to federal prison and they are losing clients.

At home, Laurel says a prayer with baby Christopher when Michaela comes in worried about her text to Marcus. The guys are all working on their papers to get back into Annalise’s class, Frank reminds Conner the only reason he got back into school is that Annalise called in a favor. When Christopher starts crying, Frank goes off to take care of him and all the friends push Laurel on her relationship with Frank, informing her that Frank loves taking care of the baby because he likes her!

Nate Lahey (Billy Brown) comes to Bonnie Winterbottom’s (Liza Weil) office, where she reveals she is playing Miller, because if Denver hid anything, Miller would be the one to know; and Annalise has no idea about what they are doing. She swears Annalise is a witch when she contacts her as soon as they start talking about her.

Frank asks Laurel how she feels about her mom being alive. She mocks him when he suggests it wouldn’t hurt to baptize the baby, so he doesn’t end up in hell. She says they were both baptized, asking if he thinks it helped them? They both laugh. He promises if her mom shows up and tries to mess with Christopher he will take care of her. Laurel kisses him and they end up in bed together. Annalise attempts to call Laurel, who wants to see how Christopher is doing but gets no answer; clearly not spending time with Nate who is with another woman.

Bonnie laughs at Miller’s speech, who wants to hire her to write it for him. He is completely interested in her and she takes advantaged of it, but isn’t sure if its allowed. He attempts to kiss her, but she says not at the office.

Michaela calls Marcus, leaving a message revealing she is single and likes him. Asher talks to Conner and Oliver about Michaela being a hot mess; but they both point out that he also hasn’t been with anyone else, suggesting he might still love her. He says he might move into the apartment next door, Conner says they couldn’t pay him to live in Rebecca’s old place and they need to help him with his presentation.

Conner takes Michaela and Laurel to the address Oliver gave him. Michaela thinks this is where he wants to get married, he says this is where they are going to live, reminding Laurel she is broke and this is the perfect place for the “village to raise the child!” Oliver says Laurel owes him for putting Simon in a detention center, or worse back in Pakistan where he can’t speak the language nor be gay.

Frank meets with Annalise, showing her that Gabriel Maddox is lying to her and she should bounce him. She doesn’t want to know anything about them as she is a new woman. He notices all the firm files in the garbage and suggests she start a new firm with him and Bonnie. She says she needs money to retry her clients’ cases, but he insists she is the money and sometimes she just forgets that!

Tegan walks into the meeting Annalise is having at Caplan & Gold, who now say hiring her comes with baggage. She isn’t there to beg and if they don’t understand, she will go find someone who will understand her worth. She walks out and in the parking garage she almost goes back but decides against it. He phone rings and she is told she wins and to come back to close the deal.

Annalise informs her students that her clinic is now being funded by Caplan & Gold and the student at the end of the semester will get a year’s tuition in full as a prize. She announces who will be competing – Michaela Pratt, Laurel Castillo, Conner Walsh. She has one seat left but has to ask if Gabriel Maddox is 2L, he admits he is as she says he broke the rules. He reminds her that she said she didn’t care about the rules. She questions whether he can handle this too. She looks at him and welcomes him to the clinic; leaving Asher out of the group suggesting him and the rest to change the world on their own.

Frank is on the phone, suggesting to regroup so no one gets hurt. He is excited about Laurel’s victory but she informs him that her and the baby are moving out. He thinks its the worst idea ever. She loves how he loves her and the baby, but she feels she is using him and all her energy needs to be for the baby and school. He gets on his knee and asks her to marry him and that’s how right he feels this is. Laurel looks at him and tears up, saying she can’t because she isn’t like her parents.

Christopher’s baptism takes place, as Asher is furious he wasn’t accepted to the clinic. Scenes show him confronting Annalise, saying she wouldn’t even be there if it wasn’t for him. She questions if he even knows he really is because all she sees is a boy who is a people pleaser and plays a clown, which isn’t a good look for a man, let alone a lawyer.

They all move in to the new house as Michaela is blown off by Marcus. She blocks him and says this year is all about her and Laurel agrees she will make it all about herself too. At the baptism, Conner says he will never get married in a church.

Annalise learns Emmett Crawford is the only one at Caplan & Gold that believes in Annalise and hopes she doesn’t let him down. Nate finds out that the DNA is a match that Bonnie has a son out there. Frank meets Gabriel at the basketball courts and agrees to a one-on-one as Gabriel says “it’s your funeral!”

The body bleeding, can see a baby screaming sitting in the snow as Bonnie crouches down and suffocates them.