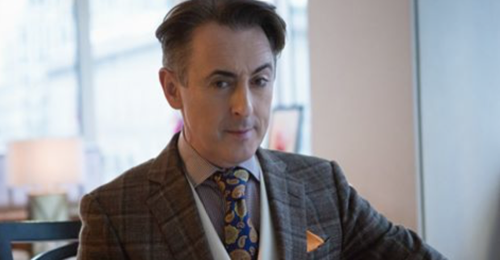 Andrew is excited, the social worker called and tells Dylan they have moved up the appointment. At the same time, Dylan gets a call, Joan’s colleague has been found dead. Dylan heads to Lizzie’s house because she wasn’t answering the phone, when she answers the door she says she overslept and Julian walks near the door with a cup of tea in his hand.

Lizzie and Dylan head out, Dylan says it is none of his business. At the murder scene, the victim’s name is Christie Walker, it looks like a suicide. The victim is hanging from the ceiling, Dylan goes up to look closer at the victim and finds her engagement ring in her mouth, he believes it was murder and the murderer wanted them to know that he didn’t want her to get married.

Dylan and Lizzie speak to Christie’s mom, her boss, and Joan; they are very surprised because everyone rooted for Christie. She was writing a true story, there were three people who knew about, she the writer and Charles. She was also engaged but recently broke the engagement.

Her fiance, Max Fisher, never showed up for work. Lizzie is at the station and is called in by Lt. Jasmine. The DA is looking into one of her cases.

Dylan tells Lizzie he has a meeting later regarding an adoption.

Max had a motorcycle accident, he is in the hospital. Max tells Dylan and Lizzie that Christie broke up with him, she was in contact with her high school sweet heart, his name is Chad and he was writing a book. Furthermore, she has been weird since she was in contact with him and she was hiding something. He followed Chad to a bar the other night, Chad was there, he yelled at both of them and she said if he didn’t trust her, then they shouldn’t get married. Lizzie tells Max that Christie is dead, she was murdered and he starts to cry.

Andy and Dylan get their home appointment. The women obviously doesn’t understand their relationship and asks if they are going to explain to the child about “normal” families. After she leaves, Dylan is upset at the woman’s attitude but Andy is more upset with Dylan and tells him that the woman was not a bigot.

Lizzie says the smudge on the rope was suspension grease from a motorcycle, the rope around Christie’s neck had his fingerprints on it, which matches the handprints at the scene and they found the exact same rope in Max’s apartment. Dylan says it was Max then, but Lizzie says not quite. Max was picked up on the highway by the ambulance 30 minutes before Christie’s death.

They search Chad’s apartment, they are looking for a clue or the book he was writing. They find the guy hanging just like Christie and he has been dead for at least 24 hours. Lizzie can’t figure out why someone would want to frame Max, there must be a reason, a connection. Dylan actually things it is a professional operation.

Dylan and Lizzie go see Chad’s parents, they say he was doing better lately; they say he and Christie were high school sweethearts. All of sudden, Bobby KulKannon, the next Senator with a Dr. Brofy. Dylan asks them if they saw anything different about Chad lately. Bobby has been busy and hadn’t seen him in years. Dr. Brofy says he used drugs, drank and was desperate – he took care of him, Dylan asks if it was Lambsman; a secret society.

Dylan tells Lizzie that his father was a Lambsman. The two head to a sobriety program that Chad was attending, they speak to his sponsor. Apparently someone visited him the other day. It turns out that Dr. Brody went to see him the day before he was killed. Both Dylan and Lizzie don’t like Dr. Brofy who says he knows nothing about Chad writing a book.

Andy calls Dylan home, someone was in the house and he worried. Dylan checks his safe, nothing is missing. He finds an extremely high end surveillance mic that was planted under his desk. Dylan calls Julian for help.

A woman is following Lizzie and Julien, they try to catch her, but can’t.

Dylan and Lizzie go see Charles Whitehead who was the third person who knew about the book, he mentions that Kilkanon, Brofy and Chad were members and he is wondering if he is a member too. Whitehead says no, he was only a member of the glee club.

Dylan and Lizzie go to see Brofy who defends Bobby. Brofy mentions Dylan’s adoption and tells him if he comes after him or Bobby he will make public ever shred of his life.

Lizzie can’t believe that Dylan didn’t say anything, Dylan thinks that Whitehead is definitely the next victim, they head over there and he has been hung, but he is still alive. They get him down quick and place him on a chair.

Dylan tells Whitehead that he go lucky. Whitehead reveals there was no book, Christie told him that Bobby and Brofy killed someone 15 years ago and he tried to protect them as lambsman, but he didn’t know they were going to kill Chad and Christie.

Dylan goes to see Bobby and tells him he knows about all three murders, Brofy revealed all. Bobby says he didn’t kill Tony, Brofy did it, they were drunk and Brofy hit Tony’s head on a rock. Dylan and Lizzie go and arrest Brofy. Meanwhile, Christie mailed the book to her mother.

Dylan goes to see Lt. Jasmine and tells her that he is the one who lied to Lizzie and she is not to blame by the DA. Lt. Jasmine says she just may fire him.

Dylan is home with Andy, they enjoy some wine.

The next day, Dylan brings pizza to share with Lizzie, she tells him that Lt. Jasmine called and she is off the hook but he didn’t need to do that.