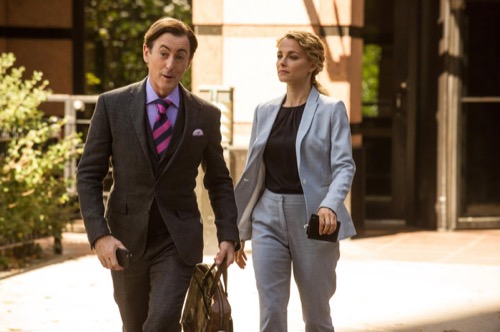 Dylan and Andrew are making dinner at home when Lizzie calls; they’ve been assigned a new case, an attempted murder. Dylan gets his coat, he is heading out to meet Lizzie. Meanwhile, Lizzie is looking at old photos of she and her fiance who died.

Lizzie and Dylan arrive at the house of Mrs. Baxter, the attempted murder case. Lizzie asks her if she has any idea who tried to hurt her. Mrs. Baxter says she was at her computer, on the last chapter and she needed a break. She went to the kitchen to get a drink and the attacked came in with a mask on his face, a well-tailored suit, and a knife. She tried to get away from him and if her publisher had not arrived, she could be dead. Mrs. Baxter recognizes Dylan for the book he wrote. Lizzie asks her how she knows her attacker is a man, she says that he said to her, “Bye Bye Birdie.” In the meantime, the knife she was attached with is found and a possible shoe print outside the house.

At the station, Joan drops by to see Dylan and tells him that Mrs. Baxter called her to publish her next book. Lizzie arrives and wants someone to read Mrs. Baxter’s latest book to see if there are any clues in there. DNA is back, there are prints on the knife that belong to Ben Richfield, Mrs. Baxter’s old writing professor that she bumped into a little while ago, he was rude to her.

Lizzie and Dylan talk, she tells him that after Charlie died she had a hard time getting rid of the doubt and suspicion; she thinks he may have been playing both sides, or maybe he was even dirty. Lizzie is supposed to accept an award for him and she doesn’t want to given the circumstances.

Lizzie and Dylan go to see Ben Richfield and Dylan asks him right out if the tried to kill Mrs. Baxter. Lizzie asks him to roll up his sleeves to see if he has any cuts and bruises, he says not without a warrant.

Dylan goes to meet Julian, he asks him about Charlie because he knows Julian didn’t stop digging into his past. Charlie was involved in one of the riskiest operations ever attempted by the NYDP. Rodriguez was Charlie’s eyewitness and Lizzie is looking for him, Dylan asks Julian to find him first.

Dylan meets up with Lizzie and tells her that Ben Richfield is a narcissist. Lizzie tells Dylan that a woman was killed by a man with a mask, fits the same description as Mrs. Baxter’s attacker.

The victim was stabbed 31 times, the angle of the wounds suggest the attacker was on top of the victim. The victim’s name was Renata, she was a writer and spent her days at the gym. On Renata’s phone, there are texts to Ben Richfield, looks like she was blackmailing him.

Dylan goes to see Mrs. Baxter, she says she doesn’t know Renata. She tells him that Ben had a reputation of stealing his student’s stories. Mrs. Baxter is fighting cancer, she tells him that she was an orphan a nine, she lost her family to a drunk driver and she is dedicating her latest book to them.

Lizzie picked up Ben and has him at the station for questioning, Dylan arrived. Ben says he doesn’t know Renata, he never met her. Ben’s blood was confirmed to be in both Mrs. Baxter and Renata’s homes. Lizzie tells Ben he is being arrested for the murder of Renata and the attempted murder of Mrs. Baxter.

Lizzie is outside, going to her car when she sees a note taped to the steering wheel. It says, “forget coffee, pier 74, Warehouse II.” Lizzie heads there, get out of her car and a guy pulls a gun on her. Its Julian, he tells her that Rodriguez doesn’t want to meet her. Lizzie recounts the night that Charlie was killed. Julia tells her that 2 months before this happened Charlie opened an account in the Cayman Islands and made significant withdrawals. It appears that Charlie was playing both sides, Julian leaves, Lizzie is crying.

Back at the station, Lizzie tells Dylan that she knows he sent “Julian” to see her.

Dylan tells Lizzie that he has lost faith in Ben being the guilty party. Dylan started wondering how Renata, a writer, could afford a Tribeca apartment. It turned out that her apartment was paid for by Mrs. Baxter’s ex-husband, Renata was his mistress. Dylan thinks Mrs. Baxter was not a victim, he thinks she was the one who created this whole plot because she is facing death and wants to avenge the ones who hurt her. Dylan is worried about Joan, she is scheduled to meet Mrs. Baxter.

Joan arrives at Mrs. Baxter’s house and just as she is about to drink from a glass, Dylan shoots it and saves her from drinking anything. Dylan ushers Joan outside the house and both Dylan and Lizzie go searching for Mrs. Baxter. Dylan finds a book on a table and there is a note to Dylan thanking him for helping her write the end of her book. Lizzie walks in, the mask is there. Mrs. Baxter calls Dylan, she tells him that the revenge was worth it and she just wants to say goodbye. She tells him that she only has weeks to live so she doesn’t care if they find her.

Dylan meets up with Julian and tells him he no right to go see Lizzie. Julian says he is right, but he found that Charlie was dirty. Julian shows him Charlie’s signature on something and Dylan tells him that is not his signature.

Dylan goes to see Lizzie, she tells him that Mrs. Baxter is in Bermuda and she wants to go after her, Dylan tells her that Charlie was not a dirty cop, someone on her team was. The account in the Caymans belonged to Sosa. The DEA come in and arrest Sosa.

Lizzie accepts the award on Charlie’s behalf and gives a speech.

Dylan is home and making sushi when Lizzie drops by; she thanks Dylan, they hug.