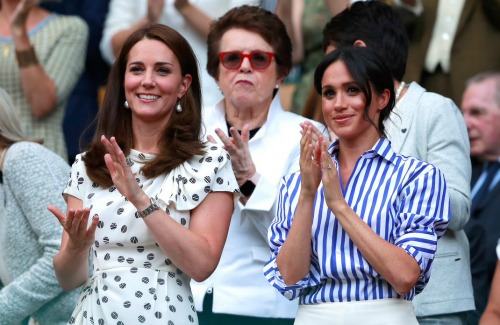 Kate Middleton is a royal ‘master’ that leads the rest of the monarchy behind the scenes, according to a new report. In fact, the Duchess of Cambridge is the one who is now leading all the family relations, as she is the one who is reportedly pulling all the strings from behind palace doors.

Britain’s Express says that the christening of Prince Louis and his ceremony at Buckingham Palace was all Kate’s influence, as she apparently gets to say what goes on where, and how everything should be coordinated. After the service, Kate Middleton and her husband Prince William hosted a private tea party at Clarence House for just a few close family members and friends.

In other words, the Duchess of Cambridge is supposedly making her mark on the royal family. After all, she is married to the future King of England and does have an incredible amount of influence. Now, whether Kate really is a royal master remains to be seen. No one really knows what is going on behind closed doors at Buckingham Palace except for the British royal family, and their staff and handlers.

With that being said though, some critics do wonder if Kate is the leader that everyone says that she is. Recent reports suggest though that if Kate were indeed in charge, she wouldn’t have stood so far away from Queen Elizabeth during the RAF celebrations last week.

In fact, the Duchess of Cambridge looked like she was at the far end of the balcony, while Prince Harry’s new wife Meghan Markle stood right next to the Queen herself during the ceremony. A lot of royal critics couldn’t help but notice that the Duchess of Cambridge looked anything but pleased while Meghan seemed to be enjoying the spotlight and her new position next to Queen Elizabeth. If there is anyone that should be standing next to the Queen, it’s Kate Middleton, and certainly not Meghan Markle.

So far Buckingham Palace has not made any comments about whether or not Kate is a royal ring leader or about the report for that matter. In the meantime, don’t’ forget to check back with CDL for all the latest news and updates on Kate Middleton and the rest of the royal family right here.