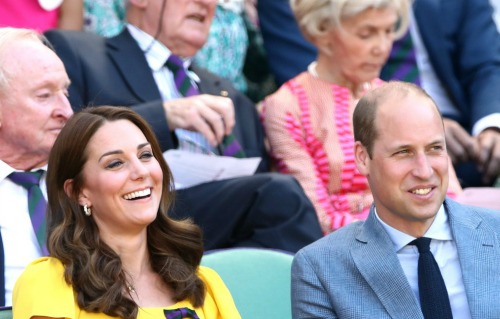 Kate Middleton debuted her new push present from Prince William at Wimbledon last week and unfortunately, very few people noticed. As a matter of fact, it took a few days after the tournament for royal observers to realize that the Duchess of Cambridge wore a new piece of jewelry on her right hand. It was a gift that was given to her by her husband Prince William following the birth of their third child, Prince Louis.

According to People Magazine, Kate wore a massive citrine ring on her ring finger on the same day that she wore a bold yellow Dolce and Gabbana dress to Wimbledon for the men’s finals last Sunday. A few eagle-eyed fans have also noticed that Kate wore the ring to Prince Harry and Meghan Markle’s wedding ceremony at Windsor Castle back in May. It was her first public appearance following Prince Louis’ birth in April.

Of course, this isn’t the first time that the Duchess has received a lavish push present from Prince William. Following Prince George’s birth back in 2013, she received an eternity band to pair with her engagement ring. And after Princess Charlotte’s birth in 2015, the Duchess received a paid of diamond earrings that were custom designed by jewelry maker Kiki McDonough. Prince William reportedly personally picked out all three push presents for his royal wife.

As the future Queen of England, it shouldn’t come to anyone’s surprise that Kate Middleton gets spoiled with some of the best jewelry that money can buy each time she gives birth to her children. After all, the Duchess of Cambridge loves to look like a million dollars each and every time she steps out in public.

If there is one thing that she makes headlines for, it’s her designer wardrobe and all of her luxurious accessories and jewelry. It’s her way of keeping her name in the headlines and of course, the spotlight focused on her. Many royal fans and critics alike would agree that Kate loves the attention that she gets from the media, even if it’s more for her jewelry than for her actual work.

So far Kate Middleton hasn’t made any comments about the push present, or any other present she has received from Prince William for that matter. In the meantime, don’t forget to check back with CDL for all the latest news and updates on Prince William and Kate Middleton along with the rest of the British royal family right here.