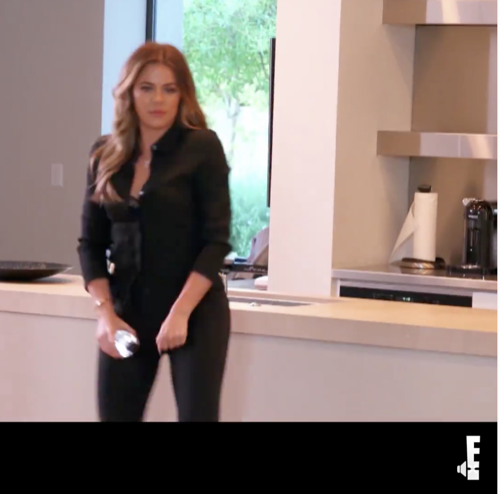 Tonight E!’s most-watched series Keeping Up With The Kardashians (KUWTK) returns with an all-new Sunday, January 14, 2018, season 14 episode 14 and we have your KUWTK recap below.  On tonight’s KUWTK season 14 episode 14 called, “Mime Over Matter,” as per the E Online synopsis, “Kourtney must decide whether to take a trip to Egypt without her kids; and Khloé hires a mime to cheer her mom up.”

Kourtney was still facing some difficulties with how she manages her time. She normally would have put most of her time as well as her effort into her kids, but she was in a new relationship now with Younes and so she often had to leave behind her three children just to spend time with him. Younes, unfortunately, lived in Europe and so his relationship with Kourtney has mostly been a long-distance one… with the occasional visit. They would either meet up when Scott had the kids or Kourtney would have to make plans for her kids in order to go on said a visit to her boyfriend that she still says was part of her vacation.

But tonight she told her sisters about her latest trip. She was going to Egypt with a few friends and was going to later meet up with Younes however before she could go, she had to work something out with her sisters. Like where children were going to go. Mason was fine with splitting his time between his aunts meanwhile Penelope wanted to stay mainly at Kim’s house because she was best friends wither cousin North. So ultimately Kourtney’s sisters proved to be willing to step and watch the kids because they were happy for Kourtney. Kourtney didn’t use to get out much and so it was about time she started to put herself first.

In fact, the sisters also wished their mom would herself first sometimes. Kris was always the one that manages their problems and Khloe for one thought it was starting to get to be too much for her. She had seen how her mom was dealing with this whole Rob/Blac Chyna situation and had wondered if her mother was ever going to get a break. But no one expected that Rob and Blac Chyna would go through such a nasty breakup. It was suspected by everyone that they were never going to last yet what came as a shocker was how nasty the split would become and that Robb would act so stupidly/ maliciously with the custody of his only child on the line.

Robb released images and videos that should never have seen the light of day so that forced his mother into running after him just to put out all the fires. But Khloe remembered how her mom used to be. Kris used to be the life of the party and always ready to laugh, but nowadays she was more business than leisure and so Khloe had an idea. She had seen a reality show that handcuffed someone to a mime and it had been so hilarious that she decided to do it to her mom. Khloe went over to Kris with her new friend Pierre the Mime and she tricked Kris into handcuffing herself to Pierre before she revealed it was going to be for twenty-four hours.

Kris was of course bewildered by what happened and she had tried to laugh through it though there had been several instances that mortified Kris. Like the time she had to use the bathroom. She demanded that Khloe come with them because she didn’t want Pierre to see anything and it was actually more embarrassing being not able to reach the tissue paper. Kris lamented while she was in the bathroom that it was going everywhere and that she had made a mess. So while Kris understood what Khloe was doing, it was way too inconvenient and she tried to get out of it more than once.

Kris pleaded for the keys and then tried to pick the lock to free herself. But the whole time, Khloe was laughing up a storm. She thought Pierre was hilarious and thought her mother would fall in love with him too. So Khloe ignored all of her mother’s phone calls and text messages and Kris nearly lost her mind. She had tried taking Pierre to the food market to do some grocery shopping and he had been wild. He had picked up a ton of random stuff, gotten up on the conveyor belt, and had balanced a ladder on his nose. And so ultimately got both Kris to start laughing more because Pierre was just too wild.

Kris just thought it was lucky they didn’t get kicked out of the market, but she knew that she couldn’t go about the rest of her day with Pierre and so she cut off her handcuffs when they got back to the house. But she then felt bad about it for hurting Pierre’s feelings and inadvertently developed a small crush on him that she freely admitted to Khloe. So Kris enjoyed the experience and she even opened up to Khloe about how hard it been in dealing with Rob’s custody case so Khloe decided to help out. She talked to Rob and did her best to make sure he was in a good place. And while Rob did seem like he was doing better, Khloe just hoped he stayed on that path.

But Kris did take time for herself and later on, she showed up at Khloe’s house in full mime makeup and gear. So Khloe loved it and the two got to laugh over their new love of mimes however Kortney hadn’t been sure if she should go to Egypt because she had talked to a cousin about how her children should always come first and so the rest of her family had had to push Kourtney. Kourtney deserved a break every now and then and she ultimately realized that for herself. And so the whole family watched the kids and Kourtney finally stopped feeling guilty about her “trips”.