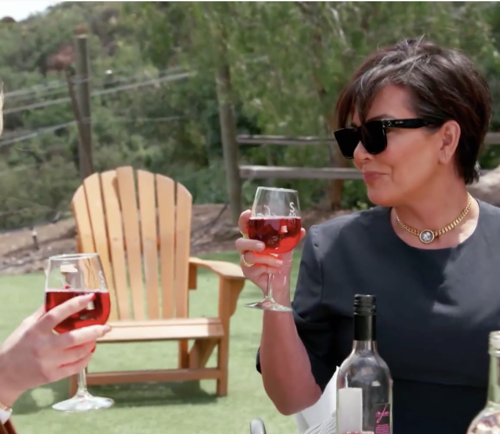 Tonight E!’s most-watched series Keeping Up With The Kardashians (KUWTK) returns with an all-new Sunday, February 18, 2018, season 14 episode 18 and we have your KUWTK recap below.  On tonight’s KUWTK season 14 episode 15 called, “Scott realizes that the girls know very little about Kris’s history, so he sets out to make her a commemorative legacy video; Kendall’s anxiety strikes again right before Milan Fashion week; and Khloé attempts to rebuild her friendship with Malika after a falling out.”

Kris and Scott’s relationship has improved a lot since they went to Fashion Week in New York together.

They now make more of an effort to hang out and lately Scott has been asking Kris about her childhood. She doesn’t really talk about that time and so he had been curious. He knew that she had a Papa Harry and that she hadn’t talked about her father, but he asked her about it tonight and she told him about how he had to move to Ohio for work when she was young. Her father had more or less missed out on her childhood and that could explain why she started to act out when she became a teenager. She had hit the stealing her parents’ car phase and had gone on to tell Scott a whole bunch of things that had happened in her life that kids didn’t even know about. So Scott decided to talk them about Kris.

Kris was like a surrogate mother to Scott. Scott had lost his mother before he could truly ask her any of the questions he asked Kris and so he thought it was only fair to tell both Kim and Khloe that they should talk to Kris while they still had her. Kris was willing to talk and so all they had to do was be willing to listen. They hadn’t known a single thing about their grandfather and had actually thought he had been a bum until Scott told them differently. He told them their grandfather had been an engineer and had worked on planes. Then, Scott had asked them why they never asked and they said they hadn’t known that the man they believed was their grandfather was their step-grandfather until they had been older.

Their mother hadn’t wanted to explain to them when they were kids that her father had died by then and so they hadn’t found out the truth until Kris deemed they were ready though Scott had gotten this idea about how to change the girls’ relationship with their mother. Kris’s own mother had gotten a legacy video and so Scott suggested doing one for Kris. Kris has such a strong family and has built an empire no one thought possible so why not ask her how she became that woman. Kris had mulled the idea over and she agreed to do it. She was going to be “interviewed” by Scott about her life and they were going to record it to one day show all of her children as well as her grandchildren.

In the meantime, however, Kris had had to support her daughter Kendall. Kendall suffers from anxiety and she was constantly trying to handle it on her own except that wasn’t helping. She needed to find a way to keep calm and so she tried turning to aromatherapy. She visited a woman that was supposed to help her find her zen place and that had helped a little. Kendall just hadn’t wanted her mother to go with her on a job because Kris inadvertently causes her to get even more stressed out and so Kendall did her best to talk her mom out of going with her. And so she thought that had worked when in actuality, Kris merely went anyways and hadn’t told Kendall because she wanted to be on hand if she was needed.

Therefore, Kris’s kids sometimes push her away because they either want or think they should be able to handle thing on their own. That just doesn’t stop her from wanting to help and so Scott go to the bottom of the woman behind the empire. She had had an idyllic childhood in which she spent a lot of time with family and that changed when her parents got divorced when she was seven. That’s when her dad moved for work and her mother eventually remarried the man that would become her father. Her biological father didn’t return to the picture until she was a teenager and then she had him for only four years before he has died. He had been in Mexico on a trip with his girlfriend when they got involve in a nasty car accident and he died while his girlfriend was able to walk away.

Kris had needed to call her mom after that because she didn’t know if they had stayed in contact with the girlfriend and so there was some stuff that she couldn’t remember anymore. What she did remember was that Robert had found out she was going to be in New York the same time as he was going to be there with his friend OJ and that guys had been excited about the Olympics. Robert had told her that he was interested in seeing this newcomer named Bruce Jenner and that it was the Olympics that would go on to make Bruce a household name. So no one knew about this story and Scott found it uncanny that her first husband had accidentally mentioned the man that would go on to become her second husband. And that was just one of the many stories no one knew about.

There had also been a story about Caesar who had been Kris’s boyfriend when she met Robert Kardashian and she had cheated on poor Caesar with Robert. Robert’s shirt had gotten torn when Caesar found out about him and tried to fight him yet Kris states that she never wanted to hurt anyone. She hadn’t known that what she developed for Robert would prove to be serious and so her kids had been a little surprise when they watched her legacy video. Khloe had joked that their mother was a whore and that’s where they get it from when they saw that part of the video. Another part of the video in which Kris described how her leg was almost amputated was perhaps a little more serious and scarier.

Khloe hadn’t known that there had been a scare and so that had come as a shock to her along with a lot of other things, but it was good to hear about it while there was still time to discuss it and the video proved to lift whatever remaining tension she might still have had from her recent fight with Malika.