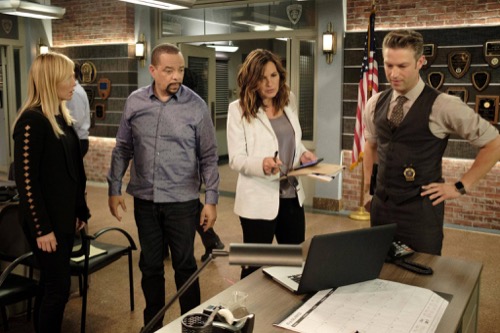 Tonight on NBC Law & Order SVU returns with an all-new Wednesday, March 14, 2018, episode and we have your Law & Order SVU recap below.  On tonight’s Law & Order SVU season 19 episode 16 as per the NBC synopsis, “A girl’s tragic death becomes a criminal case when a surgeon harvests her organs without parental consent.”

A young girl was dared into something that had unfortunate consequences on tonight’s all new episode of “Law & Order: SVU”

The young girl’s name was Zoe. Zoe had played a basketball match and had just finished getting off the bus when her friends came up with a dare. This dare however was too much for a young girl. She had been dared into kissing a stranger off the street and had gone up to do it when her friends freaked out. They realized that Zoe was going through with the dare and had run back into school because they had spooked. They were playing around with something that was just too adult for them and had acted like the kids they were only they had left Zoe behind.

They both later claimed they hadn’t stuck around to find out what happened with Zoe and they also claimed they had been too scared when they hadn’t bothered to say anything when that encounter with the stranger proved to be the last time they saw their friend. They had just gone on with their day and weren’t going to mention the dare until Zoe’s mother began to panic. She had tried calling her daughter and had waited for Zoe yet Zoe never came out of the school and so the mother was forced to rely on Zoe’s friends.

She had asked her daughter’s friends if they saw her daughter and they said they hadn’t. They said the last time they saw Zoe was when they got off the bus after a match and so Zoe’s mother went into the building looking for Zoe though she never found her daughter. Her daughter had seemingly gone missing without noticing and so that’s when someone thought to call the police. The police came and cordoned off the area hoping to find the girl except they couldn’t find her in school. The school had been checked by the officials and so the police hadn’t questioned it even as they spoke to Zoe’s friends.

Zoe’s friends had confessed to the police and SVU in particular that the last time they had seen Zoe was when they dared her to kiss the stranger. The stranger had been using one of those rentable bikes and so the police were able to track him down from though the man they ended up meeting hadn’t come across as a kidnapper. David was young himself and had been frightened when he noticed his door had gotten kicked down. And so he was perfectly willing to talk to the police. He told them that a young girl had come up to him and had kissed him on the cheek.

He also claimed that’s all that happened. He said Zoe had run away afterwards and had gone off with her friends. Her friends it seems had come back out for Zoe and so they had lied to the police and everyone else. They later confessed, only after being taken to police headquarters, that they had been playing a game. The game was a game of dares and they all took turns. They said that day was Zoe’s turn and so they revealed all the dares. They had dared Zoe to spill her soda at lunch, they dared Zoe to kiss a stranger’s cheek, and lastly they dared Zoe to run around the gym in her underwear.

The two had also claimed that hadn’t seen what happened next because they left and so they had both denied seeing what happened next. What happened next had been an unfortunate accident. Zoe had slipped and had fallen through the bleachers, so they found the girl under there and she was badly injured. She had suffered a head wound and had been taken to the hospital where she was later declared brain dead. The doctor said that there was nothing that she could do and so the police had to think about whether or not to charge her friends. Her friends had lied to everyone and the new ADA had seriously considered charging them except he ultimately decided not to.

The kids had been stupid and the doctor said that finding Zoe earlier wouldn’t have changed a thing, so it just hadn’t made sense to charge them. The situation was bad enough and so the police had gone to the hospital to talk to Zoe’s parents about what happens next yet Mrs. Bergkamp had just remembered at that moment that she had given her daughter her mother’s ring and so she had gone back into Zoe’s hospital room when she saw something. She and her husband noticed that there was a scar down their daughter’s chest and they both knew that had nothing to do with brain surgery.

Zoe’s head had been operated on because the doctor said she had suffered swelling as well as fluid accumulating in the cranium and so the scar down the chest was something Benson though she should question the doctor about. Dr. Franchella had seemed like a great doctor that cared about her patients and so when Benson asked her about the scar, she hadn’t been afraid to confess she had removed Zoe’s organs. Those organs could help if not save someone else and Dr. Franchella said what she did was for the best.

The doctor said that the patient was brain dead and that the organs would have gone to waste though the doctor hadn’t gotten permission to harvest Zoe’s organs and so Zoe’s parents demanded that they be returned. Benson had followed through on their demands and she had gotten back organs that would have been transported to a sick child at another hospital only she hadn’t felt comfortable about it. She had tried talking to the parents about possibly donating the heart seeing as it had already been removed and sadly Benson had failed to change their minds.

The parents hadn’t wanted to let go pieces of their daughter and so they kicked off an investigation in Dr. Franchella. Franchella had been a little too calm about harvesting Zoe’s organs and so the police had looked into her, but they hadn’t been expecting that Franchella would have illegally harvested the organs from thirty-one other dead children or that she had gotten away with this by forging the signatures of the parents. She had committed forgery by faking the signatures on consent forms needed for other hospitals to accept the organs and so the police brought her.

Benson hadn’t been sure about arresting Franchella because she thought Franchella was practically a saint for saving so many lives and both Carisi and Finn agreed with her. They hadn’t seen what Franchella did as wrong while Rollins sided with the families of the children because she said that the doctor had no right to decide what would happen to those children. Those children were either dead or brain dead and the only one that had the right to be making a decision for them should have been their parents, so while the department was split on whether Franchella was guilty or not Stone had gone ahead with the case.

Stone had taken the good doctor to court and Franchella’s team had put up a great fight by saying the ends justify the means. They had mentioned all the children she had saved, they had showed off several files in which Franchella saved a life, and they had even put a boy on the stand. He was the boy that was supposed to get Zoe’s heart and he described his rare condition. He said that he was close to dying and that he had been on the donor list for the past three years however they hadn’t gotten a call about an available heart until they thought they were going to get Zoe’s.

He had also said that if he had gotten a new heart that he would be able to live a long life and so many had questioned what the Bergkamps did including Dylan Bergkamp. He had apologized to the boy’s family for what he chose to do and had explained that in the heat of the moment that they hadn’t thought of anything besides their own tragedy. So Stone wasn’t sure how he was going to win the case and had asked Benson’s team to look into Franchella’s financials. The doctor wasn’t accepting money for organs and so the only thing that was a red flag was her yearly donations to charities.

The doctor donated money in her son’s name and her son had died because he had needed a heart transplant yet hadn’t received one in time and so Stone brought that up. He showed that Franchella had an agenda and that she had stolen the choices from several individuals. And so he had ended up winning the case except no one had celebrated the win when they found out the little boy that needed that heart had passed away.