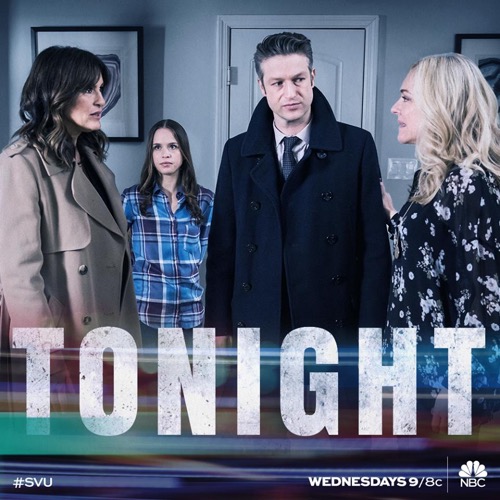 Tonight on NBC Law & Order SVU returns with an all-new Wednesday, March 7, 2018, episode and we have your Law & Order SVU recap below.  On tonight’s Law & Order SVU season 19 episode 15 as per the NBC synopsis, “Carisi opens a police investigation when his niece reports a classmate for sexual assault, and Stone learns there are no perfect witnesses when it comes to sex crimes.”

Carisi is at a coffee shop with his sister, Theresa. She tells him that her daughter Mia was raped by a fellow classmate named Ethan at college. Carisi is angry. He cannot believe she didn’t tell him. The campus police are involved and conducting their own investigation. Ethan is given a one-year suspension. Angry, he has an outburst and threatens Mia.

Mia comes to see Carisi and Theresa. She is crying. She tells them what happened. Carisi tells them he is opening an investigation.

Carisi updates Stone and Liv on his niece’s situation. Liv tells Carisi he is officially off the case, but unofficially don’t screw it up.

Carisi brings Liv to his sisters. Liv talks to Mia. She tells her if she didn’t consent then that is rape. Meanwhile, Fin and Rollins arrive at Ethan’s home to question him. Ethan reveals that he didn’t even want to hook up with Mia. He likes her roommate Renada.

Carisi and Rollins talk to Renada. She thought Ethan was a good guy. They get a lead on a fellow classmate named Andy that they should talk to who spent the night with Mia in her room on the night she was raped.

Rollins and Fin track down Andy. He asks if Mia also says he raped her. They take him into the precinct. Rollins and Fin question Andy while Carisi and Liv watch outside.

Liv visits Mia who is upset that Andy is now involved. She didn’t want anyone to know he was there. It makes her look bad. Liv comes downstairs and talks to Carisi. She tells him that Mia won’t make a convincing victim.

The DA doesn’t think that they have enough evidence to go to trial. Ethan’s parents are happy while Carisi’s sister is angry. Carisi apologizes to Mia for letting her down. Mia confesses that Ethan moved too fast and she wasn’t ready. She confesses that she said yes. Carisi cannot believe she lied. He tells her she needs to make this right.

Carisi gets a call from Mia. He heads to her dorm. She tells him she was raped by Ethan. She apologized like he told her to and Ethan was mad so he forced her down on the bed. Now no-one is going to believe her, she cries. Carisi tells her that they will. They are going to lie about the first incident.

Ethan is brought in. Stone and Fin talk to him and his lawyer. Ethan tells them that Mia is setting him up.

Liv arrives at a restaurant where Stone is. She tells him she cannot stay for long. She sits and they talk about Mia being an imperfect witness. Liv tells him that in SVU you go to trial to gain closure and justice for the victims, not to win.

Carisi meets with Mia. He preps her for what could come next. Theresa begs him to get her daughter justice.

In court, Mia takes the stand. Ethan’s lawyer claims Mia is crying wolf and now that she couldn’t get him punished the first time and she wants to try again for the second time. The judge finds the lawyer in contempt.

Carisi takes the stand. He is asked to discuss the 1st rape compared to the 2nd. He goes silent and then confesses that there wasn’t the first rape.

Liv calls Carisi into her office. She asks her what he was thinking. Carisi goes to see Stone at a bar. Stone commends him for telling the truth.

At the Supreme Court, Ethan is on the stand. Stone questions him. He gets him angry. Ethan snaps and confesses Mia ruined him so he got to ruin her. Later, the verdict is handed down. Ethan is found guilty.