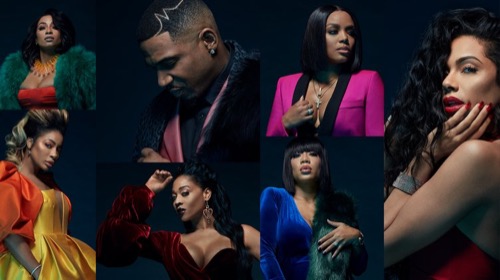 Tonight on VH1’s hit series Love & Hip Hop Atlanta returns with an all-new Monday, April 2, 2018, episode and we have your Love & Hip Hop Atlanta recap below for you.  On tonight’s season 7 episode 3, “Beginnings and Endings,” as per the VH1 synopsis, “Sierra and Shooter’s marital drama is put on pause by a shocking death in the family. Dime takes a pregnancy test. Estelita gets the courage to confront Stevie. Tommie and Spice share a heart to heart.”

This week on Love and Hip Hop Atlanta Mimi meets up with Stevie to discuss the situation with Escalida. She asks him “Did you tell her you were bringing in Ericka to be the new face of Danger Zone?” Stevie says “I am bringing in a bunch of new artists. Ericka is just one of them. If Escalida can’t get on board then she can go. I need to get my 30% of everything.” Mimi asks him “Are you sleeping with Ericka?” Stevie tells her “Not yet.” Mimi tells him “You need to get this train back on the track and stop sleeping with your artists.”

Jessica is a bit stressed because she is concerned that she is pregnant. She is taking a home pregnancy test to confirm her worry. While they are waiting for the results Shawn asks her about her mother. Jessica tells him “There is a lot of drama between me and my mother. We have had a very complicated relationship. I have a lot of going on and you are going to be gone. I have a lot of music to get out and a wedding to plan. Now the possibility of a baby. I think it’s time I r each out to my mother.” Shawn tells her “I’ll be there for you.” They go to look at the pregnancy results and it confirms that Jessica is pregnant. They are both happy.

Escalida meets up with both Spice and Ericka to talk to them about her dealings with Stevie. She shocks the ladies when she admits to having sex with Stevie. She says “I had a one night stand with him before I signed the contract. Stevie thinks that when you sleep with him he owns you, but no one owns me.” The ladies are blown away further when Escalida opens up about her past. She tells them about the abuse she suffered at the hands of her father and being raped by five men. She says “I know ya’ll think that I should just walk away from Stevie, but he was the first man to take a chance on me when I moved to Atlanta and it isn’t that easy to walk away.”

Tukatu is cooking for her new man Tovias. He is helping her move into the house. She tells him “I am excited about this Atlanta move.” He asks her how she liked the girls. She says “It was nice, but one of the girls thought it was the appropriate time at the shop to tell her that her husband stepped out on their marriage and had a two year old.” Tukatu revealed that she is a virgin. She tells Tovias “I feel like it will be a very natural and organic thing when it happens.”

Sierra is with her new man. She tells him “I was with Tokoyo when my stylist revealed that Shooter had a two year old baby and a girl that is two months pregnant.” BK is worried when he hears this. He asks her “How do you feel about this?” Sierra says “It feels like I’ve been sleeping with the enemy.” BK doesn’t want to talk about it anymore. He tells her “Let’s go on vacation to the Bronx or Miami.” Sierra is excited. She tells him “I love the Bronx, but I need some sun and the beach so let’s go to Miami.”

The ladies all meet up for a little lunch and chat. Jessica is dying to reveal her pregnancy news, but decides to wait until she is further along. Tokoyo announces that she is having an event and wants to invite everyone. She tells them “Melissa will be there.” Everyone looks to Mimi. Mimi says “I don’t have a problem with Melissa. We talked and agreed to be cordial.” Despite her words her friends are not buying her assurances of a truce between the former lovers by a long shot!

Ericka is at Jazzy’s boot camp working to get her body in shape. She is looking for Tommie who finally decides to show up. Tommie is not there to work out. Jazzy says “She has herself a cocktail and everything,” He tells her “In addition to a physical workout we are going to do some vocal coaching as well.” The vocal coach comes in to work with Tommie. Escalida and Ericka. She is impressed with all of them. Jazzy asks “How do you feel about it?” Ericka says “I’m excited about it.” After Jazzy and the coach leave Escalida tells them “I got myself into a messed up situation. I signed a contract with Stevie for five years and he told me that if I try to get out of it he’d hunt me down.” Sierra is devastated when she hears that Shooter’s son Rod has been murdered. Despite all of the drama between the two of them she goes back to support him as he buries his son.

Jessica is struggling to get her video shoot done while she is dealing with her morning sickness. A lot of people have shown up to help her. Melissa has shown up as a surprise and Mimi is not happy. Tai is also there and Melissa is not happy to see her. Mimi says “We’re cordial. Now that I’m with you and you’re uncomfortable.” Tai asks “Were ya’ll friends or were ya’ll lovers?” Melissa says “We were friends and we’re not friends anymore because of you.” Tai says “It’s not because of me.” Melissa says “Yes it is.” The argument continues. Finally Mimi tells her “You’re so full of it.” Melissa says “Now I’m full of it?” Mimi tells her “Yes, you’re full of it!” She then storms away from the table.

Sierra is still reeling from Rod Jr’s funeral. She meets up with Tokyo to talk. She tells her “Losing him was like losing my own son. He always called and checked on me.” She goes on to tell her “I was in Miami with BK when my homegirl texted me to tell me about Rod.” Tokyo asks “Has BK been there for you?” Sierra says “He has called and texted me to check and see if I needed anything.” Tokyo asks “What about Shooter?” Sierra is just so confused. She tells her “I don’t know. Shooter was so broken and I haven’t confronted him about any of the rumors about the other babies. I don’t want to do anything.” She breaks down and cries as Tokoyo hugs her.

Stevie is working with an artist named Brittany when Escalida and Ericka walk in. Neither woman is happy to see the other woman and they think Stevie is once again playing games. Escalida tells him “I come here and I see you working with another artist. Did you forget that you named me the first lady of Danger Zone?” Stevie says “I feel like I can work with more than one artist at a time.” He tells her “It is going to take time.” He asks Brittany “Did it happen for you over night?” Brittany says “No. I’ve been doing this for seven years.” Escalida isn’t hearing any of that. She tells Brittany “Your outfit looks cheap.” This makes Brittany fire hot and she goes off on Escalida. Stevie has to step in and break them up. Escalida tells him “I expected you to take me seriously and work with me. Since you’re not I’m going to get out of my contract and move on.” She and Ericka then storm out of the club.