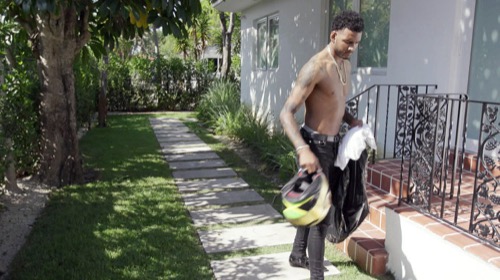 Tonight on VH1’s hit series Love & Hip Hop Miami premiere with an all-new Monday, January 22, 2018, episode and we have your Love & Hip Hop Miami recap below for you.  On tonight’s season 1 episode 4, “Fashion Victims,” as per the VH1 synopsis, “Jeffrey and Malik take their affair to the next level; Amara confronts Veronica Vega over her association with Young Hollywood; Jojo switches teams; Keyara gets payback on Gunplay; and Liz and Prince fall out.”

This week on Love and Hip Hop Miami the altercation between Shay and Gabby continues as Shays throws her ice cream and hits Gabby in the face. Blue tells P “You have two chicks who are mad at each other and you have to choose because now they know about each other.”

Jefferey goes to Malik’s house for dinner. He wants to be honest so he tells him “I’m in a relationship.” Malik asks him “Do you love him?” Jefferey says “Yes,” but he is a bit hesitant in answering which gives Malik hope for their relationship. Malik gives Jefferey a surfboard and tells him “I know you love the beach.” Jefferey is touched and the two share a kiss.

Amara is highly upset with her friend Veronica for bringing Young Hollywood to the party. Veronica is unapologetic as she tells Amara “He owed you an apology and I was trying to help you out.” Amara is not buying any of that. She asks Veronica “So you choose that guy over your friend?” Veronica gets angry and goes off on Amara. She tells her “I wouldn’t allow a man insulting my hair stop me from what I’m doing.” Amara calls her a bitch and the fight is on for real. The two women begin swearing and calling each other all out of their names. Amara tells Veronica she is a “Fake friend.”

Miami Tip is shooting a video for her new single and she wants to use Keyarra. When Gunplay shows up he is shocked. He had no idea that Keyara was going to be starring in the video. Keyarra tells him “Since you can get a bitch I can get one too.” Gunplay isn’t upset, but he tells her “You’re conquering waters that have already been conquered.”

Veronica and JoJo meet up for a spin class. After class, they are talking. JoJo tells her “I never thought this day would come.” Veronica tells JoJo “Girl my parents got divorced when I was 7 and it’s hard to let people in.” JoJo then asks about the drama that happened with Veronica. Veronica tells her about what went down between Young Hollywood and Amara.

Trina meets up with Trick Daddy. Rodney is there and he is still talking about the brawl with Bobby. Trina is over it and ready to move on. Trina wants to talk about Joy, but Trick is not having it. Trina tells him “I want ya’ll to resolve this and move on.” Trick says “I want to get a drink.” Trina says “Every time I mention Joy you change the subject.”

Prince meets up with Gabby. He tells her “I am starting my own clothing line for both men and women. It’s called Royalty and I want you to model for my line.” He invites her to hang out for the night and she agrees to go.

The next day Prince shows up at Liz’s condo after partying all night with Gabby. Liz is pissed. She asks him “Where have you been?” He tells her “I was at a Jamaican party all night.” She asks him “With who?” He tells her “With Gabby.” This information sends Liz over the edge and she kicks Prince out of her condo, but he leaves his keys in her house. A fight breaks out as prince tries to retrieve his keys. Finally, Liz throws them out the door.

Trick goes to hang out with Gunplay. He tells him about the conversation that he had with Trina about Joy. He says “Joy and I will talk about marriage, divorce or whatever I want to whenever I get ready. Trina is trying to pull some slick stuff but it isn’t happening.” Gunplay laughs.

Shay is hanging out with Michelle and her friend Liz for a day of relaxation. The friendship between Michelle and Liz is a bit strained because of Liz’s dating Prince. Shay tells the ladies about throwing ice cream at Gabby. Liz tells Shay “You have no idea how much I can relate. He was at a party with some girl named Gabby so I threw him out of my house and bleached his clothes.” Michelle says “You know Prince is having a fashion show right?” Liz says “I think that I’m going to take his bleached clothes and throw them on the stage.” Shay says “I’m with you on that.”

Bobby and Jefferey were finally going to spend a romantic night together. When Bobby goes into the closet he finds the backpack that Malik gave Jefferey as a gift. Bobby knows that Malik reps that brand of a backpack and that Jefferey can’t afford them. He quickly puts the pieces together. Jefferey tells Bobby “It was a gift. Malik came to my job and brought it.” Bobby is not hearing ANY of that. He tells Jefferey “I’m pissed that you didn’t tell that your first love showed up at your job and that you were spending time with him. I can’t be with you right now. Call him.”

Steph is performing. Young Hollywood is there because he is getting ready to work with Steph. Veronica comes backstage to congratulate her friend on a dope performance. When she sees Hollywood she is not happy. She asks Steph “Why is he here when Amara and I were nearly ready to kill each other?” Hollywood says “Does anyone think it’s wrong that I tried to apologize to her and she just blew me off?” Steph says “Honestly it’s time someone told

Amara to just get over it.” Veronica has heard enough of them bashing Amara and decides it is time for her to go.

The night of Prince’s fashion show arrives and everyone is excited about the debut of Prince’s Royal fashion line. Shay, Michelle, and Liz are all sitting front row, but Liz decides to put her plan on hold. Shay gets the shock of her life when she sees Gabby walking down the runway. After the show is over the ladies are sitting at the bar and they decide that they want some answers. They head backstage and Shay asks Gabby “What’s your name?” Gabby answers her and Liz speak up in confusion. She asks “You’re Gabby?” Chinese Kitty speaks up and wants to know what’s going on. Shay isn’t having any of it. She tells Gabby “I remember you because you were feeding my man Ice cream.” Gabby tells her “Your man is my ex!” Prince is looking shocked that Liz has shown up and essentially crashed his fashion show and that there is a major altercation happening backstage. Meanwhile, all of the women are screaming and swinging at each other. Security has to step in and separate them.