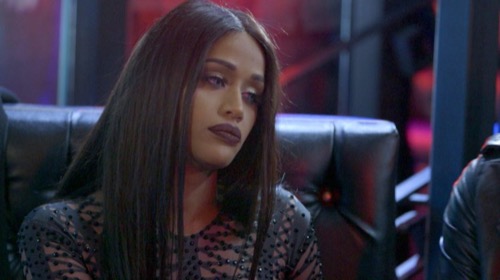 Tonight on VH1’s hit series Love & Hip Hop returns with an all-new Monday, January 1, 2018, episode and we have your Love & Hip Hop recap below for you.  On tonight’s season 8 episode 13, “St. Maarten Part 1,” as per the VH1 synopsis, “After trying to hold court between the young ladies, Yandy makes decisions on who to take to St. Maarten to help with the hurricane relief. Anais confronts Yandy about being disrespected. Bianca catches up with an old-time friend.”

This week on Love and Hip Hop New York the sit down that Remy and Yandy planned to bring peace between Bianca, Brie, Mariah and Dream Doll continues to go south as Mariah loses control and leaps across the table. Mariah and Dream have to be removed by security. Brie says “I didn’t want to do any of that.” Yandy tells her “ It’s ok. They know your trigger points and they will go for them.” Yandy decides to offer the trip to Brie and Dream. Brie tells her “I’m down with going, but I can’t be around two females who can’t control themselves.”

Remy meets up with Pap. She tells him what went down at the meeting between the four ladies and she tells him “I want to go with Yandy to help with her relief effort.” Pap asks her “When do ya’ll wanna go?” Remy says “In the next couple weeks.” Pap tells her “You know we have this in vitro thing going on. You’re gonna need to be here.” Remy laughs and tells him “You just wanna keep me here.”

Jonathon gets together with Yandy and Anais. Anais is jealous of the close relationship between Jonathon and Yandy. She tells her “You stole my best friend.” Yandy is a little upset. She tells Anais “We are going to share the best friend ok?” Anais agrees reluctantly, Yandy tells Jonathon about the disastrous meeting between her. Remy, Brie, Mariah and Dream and how her relief trip to help the people in Puerto Rico was not going to happen. Jonathon tells her “That’s part of the reason that I brought you both here. I thought maybe you could take Anais along.” Neither woman seems particularly happy about the prospect of going on a trip together. Yandy reluctantly agrees to include Anais on the relief trip, but she is definitely not happy about it.

Yandy is meeting with Remy about going to St. Martin. Yandy tells her “This trip is about bringing joy and happiness and I can’t bring joy and happiness if we have drama.” Remy tells her “Well I have to tell you that I can’t go because I can’t go.” While they are chatting Pap and Safaree show up. Safaree says “I can do a remix of my song Paradise and donate the money.” Yandy tells them “I want to take some of the girls.” Safaree says “That’s a good idea because they’ll see me with my shirt off and they’ll want to rub all over me.” Yandy, JuJu, and Remy all groan and Remy tells him to keep his shirt on.

JuJu heads to Safaree’s party and they both seem happy to see each other. Jaquueee and his new lady meet up with Safaree and JuJu. Safaree invites him to go to St. Martin with them. Jaquuuaee seems excited to go and get out of town.

JuJu is packing for St. Martin when Yandy stops by. Yandy tells her “JuJu you don’t need all this stuff.” JuJu tells Yandy “I went to Safaree’s EP release party and Safaree invited Jacquaee.” Yandy is a bit shocked, but she is ok. She has bigger issues. After filling JuJu in on the brawl that ensued between the girls she asks JuJu to help keep them separated.She tells her “I need you to help me keep Brie and Mariah separated. I want you to take Brie and Anais with you, and I will take Jonathon, Mariah, and Anais with me and you keep Brie with you.” Anais agrees.

Yandy enlists the help of Self to deal with Mariah. He sits down with her and tells her “I think you need to go down there and help others.” Mariah says “I like helping people!” Self tells her “Safaree is going down there to do a remix of his song. The only person that you might have a problem with is Brie.” Mariah is not happy when she hears that Brie is going on the trip. She tells Self “No. I’m not doing it.” Self says “I thought you were all about helping people and this will help people.” After thinking about it for a bit Mariah finally, reluctantly agrees to go, but she is not happy!

When they arrive on St Martin the drama gets started early as Anais kicks her diva act into high gear. She steps out in a bathing suit while everyone else is dressed to work. Jonathon tells her “You need to go change your clothes and get dressed to work.” Anais tells Jonathon “You’re not being a good friend.” Everyone is shocked by Anais’ behavior as she prances around while they are planning on how to help the people who were devastated by the hurricane.

Meanwhile, there is plenty of drama stirring in the other villa as well as Jacquaae sees the issues begin between his new girl and his sister. Mariah is already stirring it up. She says to Safaree “I heard there was someone else who was going to be on this track.” Safaree asks “What are you talking about?” Jacquee quickly steps in and says “We are here to help Yandy and to do good things for the people on this island. It’s all about peace and love.” Everyone agrees. JuJu tells them “This is me and Mariah’s villa. You guys are staying at a hotel so don’t get comfortable.”

Meanwhile back in New York Bianca is not happy when She hears that Mariah and Brie are on the trip to St. Martin. She decides to call her friend Hennessy to help her prepare for her upcoming performance. The two ladies are happy to see each other and Hennessy gets all the dirt about the issues between Bianca and Brie. Bianca is angry that she is not on the trip and Mariah is. She feels that Mariah betrayed their friendship.

Meanwhile back on St. Martin it seems like everyone has gotten themselves together and they are handing out water and other supplies to the children at one of the schools.

Anais is still upset the incident from the night before and chooses the time when they are supposed to be helping to approach Yandy. She asks “Can I talk to you for a minute?” Anais tells her “I’m not liking this deal between you and Jonathon. You need to stay away from him.” Yandy tells her “First of all Jonathon is my baby. He’s my friend.” Anais says “I’ve been there and where were you? Yandy refuses to entertain this. She tells Anais “I’ll see you later.”