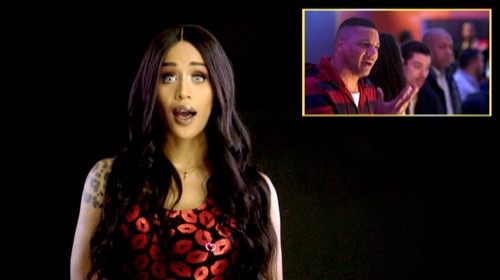 Tonight on VH1’s hit series Love & Hip Hop returns with an all-new Monday, March 5, 2018, episode and we have your Love & Hip Hop recap below for you.  On tonight’s season 8 episode 17 Finale, “The Reunion Part 1,” as per the VH1 synopsis, “The cast of “Love & Hip Hop New York” reunites as host Nina Parker gets all the tea on Season 8. Bianca and Bri address their unresolved issues, and a baby is on the way for one lucky couple.”

This week on part one of the Love and Hip Hop New York Reunion Mona kicks the show off with Anais and Jonathon. Mona asks Anais about the orgy. Anais asks Jonathon “Can I talk about it now?” Jonathon tells her “You can talk about it now. You’re sitting next to your husband.” Anais tells everyone “It was just for Jonathon’s birthday.” Nina asks Rueben “Did you know about this?” Rueben says “No, this is my first time hearing about this.” Nina moves on to Rich’s relationship with Anais. She asks him “Why do you mess with married women?” Rich says “They’re easy.” Anais says “Rich makes women feel good and he made me feel good.”

Jonathon speaks up and says “I saw her off camera and I saw text messages so I knew that they were hurt.” An argument quickly ensues and Rich says “I wanted to get out of the situation because when Rueben showed up at the autograph signing he did not look like a man who was separated. He was wearing his ring and everything.” Rueben speaks up and tells Rich “When you and I had that second conversation and you mentioned that my wife had shown herself to your friend that was foul. You need to learn how to be a man.” Jonathon tells Rich “That was a bitch ass move.”

When the reunion returns Nina moves on to talk to Bianca and Brie. Nina asks Bianca why she didn’t attack Brie. Bianca says “I couldn’t get past security.” Brie tells her “I didn’t have a problem with you.” The argument quickly escalates. Remy steps in and says “The reason that I have a problem is that this has been going on for years.” She tells them “When I was sitting in that jail cell I wasn’t praying for a song. I was praying for my family and my son.” She tells Brie “You are only 4’1o. You have to stop playing on social media because people get hurt behind stuff like that.”

Nina moves on to talk to Mariah. She says “I know you and Dream had an issue with the issue with Bianca and Brie.” Mariah tells her “We have squashed that. I have lost opportunities when people saw the episode where she and I were fighting and so has she.” Mariah goes on to say “What’s really messed up is that Dream and I were friends before all of this mess got started. The only two people who really got hurt by all of this drama were she and I so I’m done with it. I’m going to sit here and look pretty because Mariah Lynn is continuing to evolve past all of this foolishness.”

When the reunion returns Nina talks to Yandy and Judy. Nina asks Judy “Are you married?” Judy says “No, I’m not.” Nina asks Yandy “Why do you disapprove of Rob?” Yandy says “I found out that Rob was kind of sketchy.” Judy says “I have raised my kids and I have eight grandchildren. This is my time to live.” Mendecees leaves messages for both his mother and his wife. He tells Judy that he didn’t like Rob and that he’d heard that Rob was living with someone else. Judy says “I don’t care because I’m living with other guys.” Mendecees tells Yandy that he is not happy about the way that she dresses sometimes. He also says that he thinks they are moving backward. Yandy says “Of all the things he could say to me that’s what he has to say? Mendecees knows I was living my life when he was out here, I’m going to keep living my life while he’s gone and we’re going to live our life when he comes back.”

Nina moves on to talk about the severing of the business relationship between Yandy and Bianca. She asks Bianca “Why do you think Yandy terminated your business relationship?” Bianca says “I know I turn up a lot and Yandy has a brand to protect.” Pap speaks up and tells Bianca “When you have a beef with someone sometimes you have to learn to ignore it and let it go.”

When the reunion returns Nina moves on to deal with Jonathon and Trent’s relationship. Nina asks Jonathon “What is the status of your marriage now?” Jonathon says “Since I was so boldly presented with a piece of paper I have a piece of paper of my own. I am now officially divorced.” Trent is brought to the couch. Jonathon says “We were building a real relationship. To find out that you were still having sex with other people really hurt.” Trent says “Jonathon was having sex with other people too. The only difference between me and Jonathon was that I didn’t care.” Yandy says “If you were building a real relationship with him then why would you not be honest?”

Nina moves on to talk to Jonathon about his relationship with his mother. She asks him “How is your relationship with your mother now?” Jonathon tells her “It’s ok. I don’t know that it will ever be great.” He talks about being a feminine little boy and tells how he would get beaten up and kids would steal his shoes and he’d have to walk home in the snow. He says “I think that’s why my mom put me in that clinic. She wanted to get rid of the feminine behavior that the kids picked on.” Jonathon then talks about how he wants to help kids who are like him. He then says “To everyone who picked on me look at me now! You all have to sit at home and watch me on your TV!”

When the reunion returns Nina talks to Remy and Pap about their baby situation. Pap says “We now have an embryo. The Dr. is on the phone and asking if we want to know what it is.” Nina says “There is a lot of baby news going around and I think someone else on the stage has some news.” Mo speaks up and says “Merry Christmas. I’m pregnant!” Everyone congratulates them. Nina asks Karl “Were you surprised?” Karl says “No, because honestly, my pullout game is weak.”

When the reunion returns Nina moves on to deal with Mariah’s relationship with James R. Nina asks Jacquee “How did you feel about Sofia doing the video?” James speaks up and says “I have to apologize to Jacquee.” Jacquee says “It’s no big deal. I moved on and you took the luggage off my hands.” All of a sudden Snoop decides to pop off and it’s on!