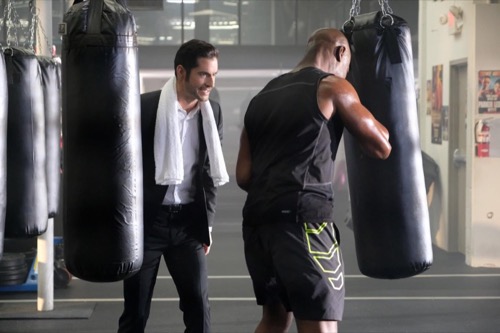 Tonight on FOX their drama Lucifer airs with an all-new Monday, January 1, season 3 episode 11 called, “City Of Angels?,” and we have your weekly Lucifer recap below. On tonight’s Lucifer episode as per the FOX synopsis, “In a flashback episode that takes place when Lucifer first came to L.A., Amenadiel comes to retrieve his fallen brother but is shocked when he is mugged. Amenadiel enlists Lucifer’s help to track down the mugger and Lucifer, in turn, offers his assistance—but only in exchange for a favor. ”

Its Lucifer’s first day of civilization after being cast out of hell. He meets a young woman on the street. They make small talk. A short time later, Lucifer is eating whip cream off of them and drinking heavily. Amenadiel interrupts the fun. He tells Lucifer he is coming back to hell. Lucifer refuses but then decides to go. He tells him he needs 10 minutes to say his goodbyes. Amenadiel steps outside. He hears guns shots. A robber runs by him but stops to shoot Amenadiel and steal his necklace.

Amenadiel heads in to tell Lucifer he has an errand to run. He changes out of his clothes and into beachwear. Lucifer is thrilled he has more time in LA. Amenadiel heads to the local precinct. He talks to Chloe, explaining he was mugged. Chloe thinks the whole thing is a joke after Amenadiel hands her a rendering of the suspect that looks like a jack o’lantern drawn by a five-year-old. She laughs and asks if one of the other officers put him up to this. The phone rings. Chloe grabs it. It is Dan. He will be late for dinner. He was called to a homicide. He tells her the location. It is the same one Amenadiel gave her. She turns to talk to him. He is gone.

Amenadiel heads back to see Lucifer. He tells him what happened to his necklace. Law enforcement couldn’t help him. They need to work together to find out. They head to an outside restaurant on the beach. Lucifer is laughing it up, drinking and playing the piano. Amenadiel accuses him of stalling and not caring about the necklace. Amenadiel catches a news report on the TV at the bar. He recognizes the man on the TV. He is an MMA fighter who was shot this morning in the same location where Amenadiel was mugged. He and Lucifer steal a car and head out to get more information.

Chloe works the case, asking around about the death of the MMA fighter. She follows a lead to a fight club where Lucifer and Amenadiel also wind up. Chloe spots a suspect and runs after them. Lucifer makes his way to the bar to get scotch. Amenadiel follows. The find out who arranges the fights. The bartender points in the direction of a man named Tito. Lucifer goes over and introduces himself. Tito mistakes Amenadiel for a fighter and Lucifer as his manager. They both tell Tito that they are from 2 different places at the same time. He tells them to leave. His bodyguard punches Amenadiel who laughs. Amenadiel knocks himself out and wins a fight at the club the following night after impressing Tito.

Lucifer brings Amenadiel to a local gym. He needs to learn how to fight like a human. Amenadiel doesn’t understand why they have to do this. How is this going to get hid necklace back? Lucifer thinks the robber was connected to the dead fighter. He made the fighter throw his fight. They need to get information from the inside and then they can get the necklace. They meet with Tito again. He wants Amenadiel to throw his fight.

Lucifer calls Maze from hell. She can help them torture the truth out of Tito. Maze gets Tito and ties him up. Lucifer and Amenadiel wait outside. Instead of torturing him, Maze has sex with him. He won’t stop talking. He tells her he didn’t kill anyone. Lucifer asks Maze to talk Tito into setting up a meeting with the robber. They want to talk to him.

Chloe visits the lawyer who represents Tito and the crime family he works for.

At the club, Amenadiel takes the ring. Before he heads out there he thanks Lucifer for helping him. He was skeptical at first but Lucifer is evil so he would know where to find evil. Lucifer takes offense. He heads out to the ring and gets in, facing Amenadiel. They fight until they are bloody. Amenadiel stops, however, he won’t stoop down to Lucifer’s level.

Back at the bar, Amenadiel tells Lucifer it is time for them to leave. Lucifer tells Amenadiel he plans to stay on earth in LA. He doesn’t care what their father thinks.

At the beach that night, Lucifer asks Maze to cut off his wings. She cries as she takes them off.