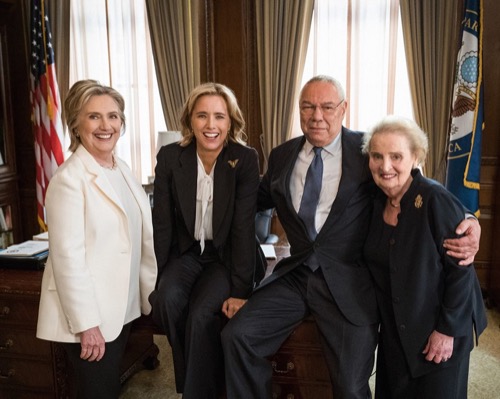 Tonight on CBS Madam Secretary airs with an all-new Sunday, October 07, 2018, season 5 episode 1 called, “E Pluribus Unum,” and we have your Madam Secretary recap below. On tonight’s Madam Secretary episode, as per the CBS synopsis, “The Season 5 premiere: In the aftermath of a deadly attack on the White House, Elizabeth tries to keep a major nuclear disarmament deal from falling apart while a manhunt for the attackers brings D.C. to a halt. For advice, Elizabeth turns to former secretaries of state Madeleine Albright, Hillary Clinton and Colin Powell.”

Stevie updates a staff member that Liz is running late. Dalton and Russell speak with their foreign guests. One of the staffers heads to get something. On the way out of the office, an explosion goes off sending her flying. There is complete chaos all around.

It’s Summer and Dalton, Russell and Liz, as well as all of their families, are at Martha’s Vineyard. The trio takes a moment to take in a meeting. Russell teases Liz about her announcement that she plans to run for president.

Liz heads into the office back from MV, Daisy and the others welcome her back. They update her on what is going on.

Russell is disgusted at Stevie’s idea to set up a tea station for him as he attempts to stop drinking coffee.

Liz meets with a leader from India. They dispute over India and Pakistan’s nuclear weapons program and the policies between them. The next day, Liz brings the Indian leader more to think about with a more promising agreement from Dalton and one that will help their economy. She says she will talk to her Prime Minister. Meanwhile, Henry is insulted on a panel for Liz’s political stance on the weapons program. He defends himself as he discusses democracy. Liz gets a call from the leader from India who has canceled their planned dinner after hearing in the news what Henry had to say.

Liz heads into the office to see Jay and Daisy. Liz cannot believe the deal is off. She asks Jay to go to Washington to see a general and bring him back to talk to the Indian government leaders. She still has a couple of days to try to pull this off.

That night Liz comes home to see Henry. He apologizes for ruining her deal. She tells him how Daisy thinks he should publicly apologize but he tells her he cannot.

Liz brings the general to her home and the Indian official. They all meet in the kitchen in an awkward face off. She offers them tea to break the ice.

June tells Russell that talks have stalled in regards to India. Stevie comes in with his coffee. He walks into his office and shuts the door without a word. June asks Stevie how her job interview went. Stevie plays dumb, she had a doctors appointment. June knows better and she knows a lot of people. She tells Stevie to hold out for her best offer, these people are looking to pouch her because of who her mother is.

Liz gets her deal back on track. She has lunch with Russell who warns her that Henry needs to get in line if she plans to run for president in a year.

At home, Liz and Henry argue. He apologizes again. Liz tells him they need to talk later. Meanwhile, Stevie confronts June. She is insulted about what she said about her mother and her connections. While explaining how she wants more, she inadvertently insults June by saying she was stuck serving powerful men.

Liz’s team pulls up to the explosion. She begs to go back but they drive her away. Stevie gets up off the ground and looks around. June is on the ground next to her. She has a chard of glass in her abdomen. Secret service comes in and sees Stevie and tries to grab her. She refuses and then collapses. She is bleeding from the back.

At the hospital, Henry is told Stevie is in surgery. Dalton informs Liz it was a group angry about the nuclear deal that was behind the bombing. Henry and Liz meet up in the hospital waiting room and talk about their fight and her run for president. They don’t want to decide anything until they know Stevie is all right. They are told she made it through and she is all right. They go to see her. She asks about June.

Russell calls to let someone know June has passed away. He is choked up on the phone.
Liz meets with Hillary Clinton, Madeline Albright and General Colin Powell. They all sit and talk about what makes America great and how we need to act as one even as diverse as we are.
Liz takes the podium at a meeting to talk about nuclear weapons and hate, about nationalism as a perversion of patriotism. Henry smiles as she gives her speech.